On the 148th birth anniversary of Mahatma Gandhi, also known as the Father of India, Prime Minister Moses Nagamootoo described him as a ‘great soul’. The commemoration of Gandhi’s birth was held at the Promenade Gardens on Middle Street today.

Gandhi, during his lifetime, advocated for non-violent actions which brought down colonialism and gave independence to his homeland of India. His teachings of peace and humanity greatly influenced various freedom struggles and inspired several world leaders such as Martin Luther King and Nelson Mandela in their fight for equity.

Prime Minister Nagamootoo, delivering the feature address, said that Gandhi left a legacy for the world to follow. “Today, if we are to take anything away to influence our own lives from the great Mahatma, we should take away the need to build our character, to promote truth even though it may be uncomfortable, to promote incorruptibility, to promote our own selves not as who we are in positions of status and in offices that may be bureaucratic but as servants of the people”, he stated. 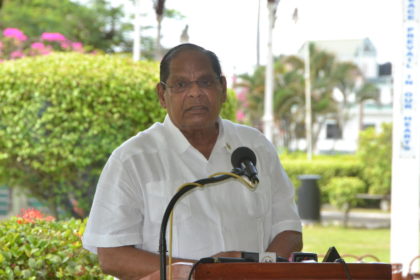 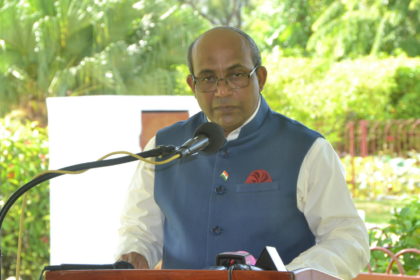 Guyana, the Prime Minister said is a beneficiary of Gandhi’s teachings which played an integral role in helping the country achieve its independent status.

“We achieved the status of a democratic country, proud to stand up with the rest of the world as a people of peace and a people of purpose without violence, without wars and if we were to adopt the principles of the great Mahatma Gandhi, we should keep it that way, we should treasure what we have”, the Prime Minister stated.

Indian High Commissioner to Guyana Venkatachalam Mahalingam said that Gandhi’s teachings of peace still hold much significance in today’s society. The High Commissioner said that even though during Gandhi’s lifetime he was faced with challenges, he refused to resort to violence to achieve a peaceful society.

Quoting from the words of Martin Luther King Jr., the High Commissioner stated, “Gandhi is inevitable, if humanity is to progress, Gandhi is inescapable. He lived, taught and acted inspired by humanity towards a world of peace and harmony. We may ignore him only at our own risk.”

In making brief remarks, Mayor of Georgetown Patricia Chase-Green said that Gandhi is a legend and lived a life worth emulating. She added that Ghandi was a gentle giant, who would whenever he could, impart knowledge, wisdom and good practices to foster unity, peace and love for all of humanity.

Some of Mahatma Gandhi’s most inspirational quotes are “You must be the change you wish to see in the world”, “an eye for an eye only ends up making the whole world blind” and “happiness is when what you think, what you say, and what you do, are in harmony.”