President David Granger has pledged the support of his Government to raise the profile of the annual Bartica Regatta and transform it into truly national event. He also urged the Regional administration and the Bartica Regatta Committee to make it a Region-wide event with participants and athletes from communities along the Upper Mazaruni and Cuyuni Rivers and a wider range of sporting and novelty events such as canoeing, sailing, water polo and swimming. The Head of State made these remarks today at the Golden Beach Pavilion, where he declared open, the 65th Bartica Regatta, which he described as an important Easter ritual in Guyana.

He explained that the Cuyuni-Mazaruni is bigger than the Netherlands, spreading all the way to Arrau and Kaikan and while this much-anticipated annual event is largely sponsored by Barticians, it must include more residents in other parts of the Region. “I do believe that the Bartica Regatta can fulfil not only the aspirations of a small group of people, but also of the whole nation… All three levels of Government, the municipal, the regional and Central, must come together with the support of the private sector to make this Regatta event, a truly national one,” President Granger said.

He noted that the Regatta has a long history, which dates back to the colonial period. It was started by Mr. Wilton Anderson Angoy, a District Commissioner, who is also credited for organising the Rupununi Rodeo, both of which are held at Easter time. The President expressed his gratitude and appreciation for the efforts of the Regatta Committee, the Regional Administration, the private sector sponsors and other stakeholders for ensuring this tradition is maintained. “Bartica is enjoying the democratic dividend for being made a town. So today as we gather here, we beam with pride because Bartica is finally coming into its own alongside New Amsterdam, Linden and other town in Guyana,” he said.

Meanwhile, Regional Chairman, Mr. Gordon Bradford said that he wholeheartedly welcomes President Granger’s pledge of support for the hosting of future Regattas, noting that he will be working closely with the Mayor and Town Council to develop a budget for a much bigger event in 2018, which will include all of the activities that the President described.

Currently, he said approximately $35M-$37M is spent on the hosting of the Regatta and a bigger event will require about $50M. “The Regatta is important to the life of Bartica and Region Seven… With Central Government’s support, I am encouraged and I am positive that we could move this event to the next level. Regatta belongs to us and we can no longer just look for handouts here and there… So in preparation of the 2018 budget we will combine our ideas and efforts and we will budget for the event,” he said.

Speaking of the economic impact the annual event, Mr. Bradford explained that all of the hotels are booked, there is an upsurge in activities in the transportation sector and shops and restaurants see a significant increase in business. This, he said, is an indication of the major boost that the Regatta provides to the Region’s economy.

Following the opening ceremony, President Granger distributed kites to the children at the Bartica Community Center Ground. Kite-flying he said, combined with the Bartica Regatta and the Rupununi Rodeo, is another important Guyanese Easter tradition. Kite design and flying were brought to Guyana by Chinese immigrants over 150 years ago and is today enjoyed by citizens of all ethnicities and religions at Easter, which is the most important Christian festival.

Over the past two weeks, the Head of State distributed kites at Friendship and Kabakaburi in the Pomeroon, Wakenaam, Leguan and Parika in the Essequibo Islands-West Demerara, Buxton and Lusignan on the East Coast and at Muritaro in the Demerara River. 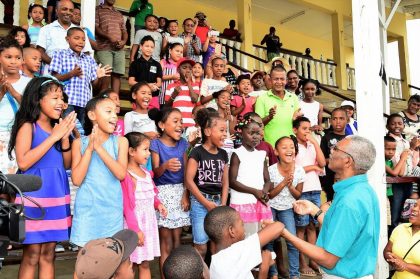 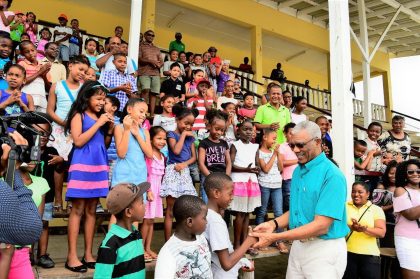 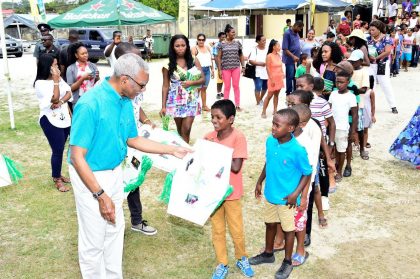 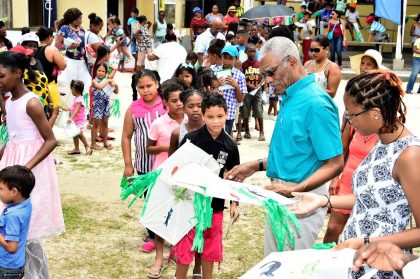 President David Granger is assisted by his grand daughter Ms. Athena Gaskin as he distributes kites to the children of Bartica 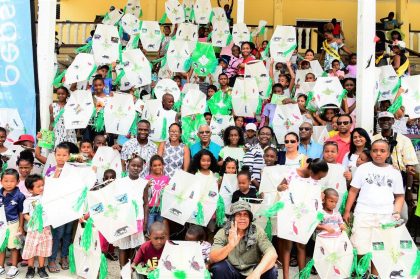 Can you spot the Head of State in this sea of kites? President David Granger joins the children on the pavilion for a photo opportunity following the distribution of the kites 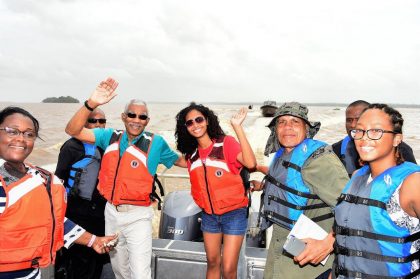 President David Granger is joined by to his right, Minister within the Ministry of Natural Resources, Ms. Simona Broomes and to his left, a contestant in the Miss Guyana World pageant, Ms. Ariell Ghanie, Regional Chairman, Mr. Gordon Bradford and the President’s grand daughter, Ms. Athena Gaskin 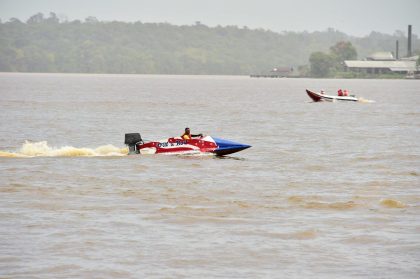 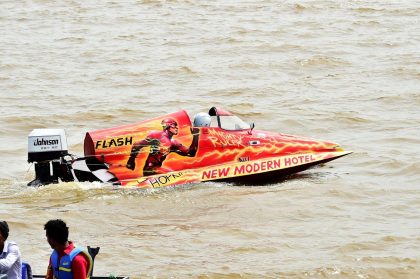 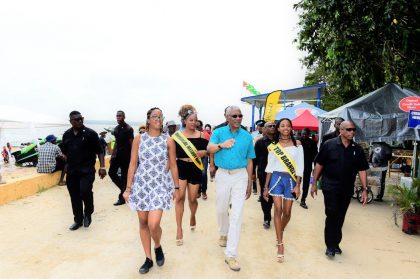 President David Granger takes a walk on the beach with his grand daughter, Ms. Athena Gaskin and two of the contestants in the Miss Bartica Regatta pageant