Enshrined in the United Nations Sustainable Development Goal number 6 is the provision of potable water for all. The Guyana Water Incorporated (GWI) is working to achieve this target; its most recent effort being the establishment of a well in Mile 1 – Mile 2 of the Matarkai sub-District in Region 1, a groundbreaking moment for the community.

During the Port Kaituma government outreach in Region 1, GWI’s Executive Director of Hinterland Services Ramchaand Jailal briefed DPI on the water utility’s plans for the community. 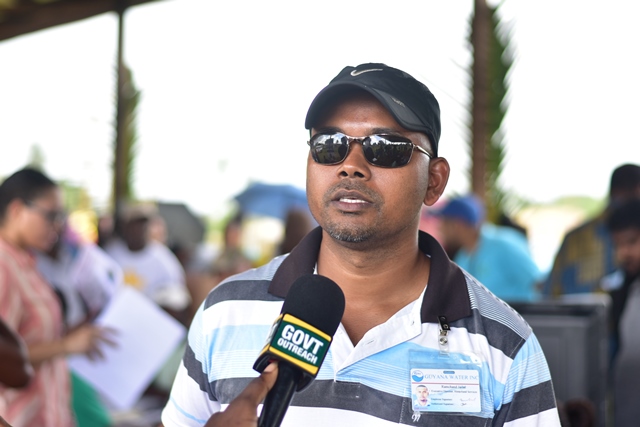 According to the GWI official, “there are residents in 1 Mile going all the way to 4 Mile that do not have access to potable water except for rainfall and so, we are going to be drilling a well within the 1 Mile [to] 2 Mile area. After it is completed, we are going to run the mains so that the residents can have access within that stretch for the first time.”

At present, GWI’s resources have reached its limit within the Fitzburg community. Hence, another well is needed to supply the 1 Mile to 4 Mile gap.

Nevertheless, with the purchase of a new drilling rig, GWI will proceed with its plans to drill new wells in Port Kaituma and Oronoque where there the demand exceeds the capacity of the wells.

Over in Aracaca, a community south of Port Kaituma, water shortage is also a challenge. Loraine McIntyre, a 54-year old housewife visited the outreach and petitioned for GWI’s intervention in alleviating the water shortages in her community.

“I have to be fetching water from long distances. Many times, we don’t get water; sometimes for months,” Loraine explained. GWI officials promised to visit the community within two weeks to ascertain ways in which they can assist.

Concerning this situation, the GWI official explained that while there is a well in Aracaca, it is incapable of serving the entire community due to its growing population over the years that has put a strain on the system. At present, the well mainly provides services to the school, hospital and a number of residents.

GWI plans to further develop a well drilled by StrataGold to increase its water production in the Aracaca area. Executive Director Ramlall mentioned that once it is determined that the well can serve the community, the necessary systems will be put in place to distribute the potable water.

In 2018, the GWI drilled new wells at Koko, Moruca and Oronoque, Region 1, at a cost of $8.7M, to provide potable water for more than 500 residents. There were also improved water service at Hosororo, new water treatment systems and increased hours of supply (from 3 to 8 hours) at Barbina and Mabaruma.