Guyana Shore Base Incorporated (GYSBI) is accelerating its construction of an onshore base facility to service ExxonMobil’s offshore operations.

Today, Minister of Natural Resources, Raphael Trotman, visited the site located at the Muneshwers wharf in Houston, East Bank, Demerara, with the media, to observe the works that have been undertaken to date. The wharf is being converted from a container port into the onshore base facility.

The wharf under construction.

GYSBI is a partnership between Muneshwers Limited, Pacific Rim Constructors, Total Tech Oil Field Services and LED Offshore. The company recently won the bid contract to operate the shore base facility for Exxon, during the oil giant’s first phase development of the Liza Field.

The 28-acre warehousing and logistics base will see services, that were previously accessed in Trinidad and Tobago by Exxon, being brought to Guyana. Those services include port facilities, accommodations on site, fuel bunkering, bulk cementing and mud plants.

“Very impressive, and what is good is that it will meet international standards and it raises the standard across the board for ports and for facilities of this nature in Guyana”, Minister Trotman said.

He noted that the functionality of this facility in no way rules out the establishment of other onshore bases. “In the future, the nation is going to still need a standalone facility in addition to (this)”, he said.

Minister Trotman added that government is also proceeding with a feasibility study to determine the best location for the establishment of another onshore facility. While Crab Island was initially identified, he explained, “The decision has to be driven by what is best in terms of servicing the industry.”

“It wouldn’t displace or crowd out existing facilities but as other companies move into more exploration and production, this facility just servicing ExxonMobil alone won’t be able to take care of the others”, Minister Trotman further explained.

Meanwhile, Part owner, Lars Mangal, in a presentation to the Minister explained that the construction of the facility is on an accelerated development path with the aim of  becoming  fully operational by March, 2018.

“Six to eight months from now, we will be 80 percent constructed on this facility and operating,” Mangal said.

Mangal said the offshore facility will employ an estimated 100 persons directly, and 200-300 persons indirectly when it is fully operational.

Minister Trotman said that he was pleased with the utilisation of locals in the construction of the facility and the possibilities for future employment opportunities.

“We are most pleased that Guyanese will now find good employment here by the hundreds, and of course it also is a positive sign that the economy is on the move,” Minister Trotman said.

Exxon’s Public and Government Affairs Director Kimberly Brasington recently told the Department of Public Information (DPI) that it is Exxon’s motto to identify and use as much local companies and persons, in its operations. 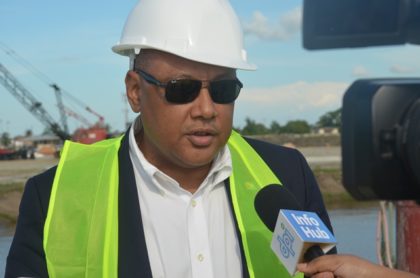