Several other villages in the hinterland have received their Jubilee grant fund under the Ministry of Indigenous Peoples’ Affairs, to start-up up a green sustainable project.

Two hundred and twelve (212) communities are slated to receive up to $2M to embark on green, sustainable projects by the end of 2016. This initiative is part of activities to mark Guyana’s 50th Independence Anniversary.

Shulinab, Moco Moco, Maruranau and St Ignatius villages are the most recent recipients of $1.5 million each; while Parikwarunawa received $1.2 million. These are all villages in Region Nine. 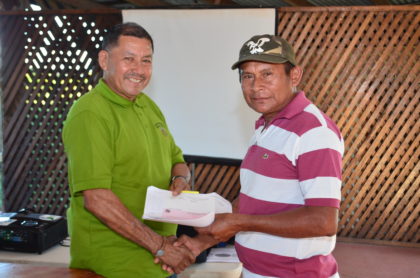 Minister of Indigenous Peoples’ Affairs, Sydney Allicock handing over a cheque to a toshao of one of the beneficiary villages

The funds were handed over to the village leaders by Minister of Indigenous Peoples’ Affairs, Sydney Allicock during a visit to Region Nine on Friday. He was accompanied by the Ministry’s Permanent Secretary, Vibert Welch, Project Coordinator, Jude DaSilva, Principal Regional Development Officer (RRDO), Anil Roberts and representatives from Conservation International and Environmental Protection Agency (EPA).

Minister Allicock urged the recipients to make full use of the support being offered to them, and to ensure that all residents, especially women and youths are fully involved in the projects.

The Minister also urged that there be continuity. “Do not to do like some communities. Lots of funding was spent on projects like tourism; one toshao built and it cost a lot and the next toshao came and destroyed it. They are now coming to say they want another design. This is unacceptable; we cannot continue to put money into dark holes,” Minister Allicock said. 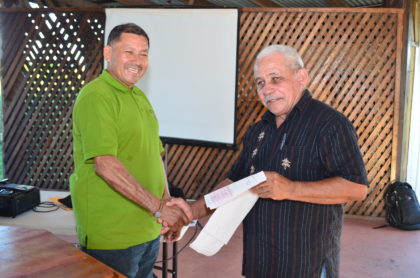 Minister of Indigenous Peoples’ Affairs, Sydney Allicock handing over a Jubilee grant cheque to another toshao

Communities are also benefiting from training in the areas of management, and transparency and accountability to ensure that their projects are properly managed and executed.

The intention, Minister Allicock said is to create economic independence within Indigenous communities, by providing support to create income generating projects, towards moving them (Indigenous people) away from the culture of receiving handouts.