The Liliendaal Bridge re-opened today with the addition of walkways on both sides of the structure, catering for pedestrians.

The bridge had shown signs of imminent failure, when several panels become detached, destabilising the structure. Works commenced in early March to prevent a collapse of the bridge. Permanent Secretary in the Ministry of Public Infrastructure, Geoffrey Vaughn, said that efforts were intensified to complete the repairs before the end of June. 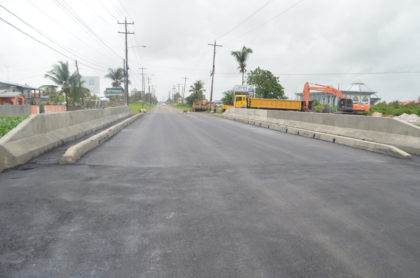 The rehabilitation of the Liliendaal Bridge was carried out based on recommendations from the Demerara Harbour Bridge Corporation’s (DHBC) Inspection Team and engineers attached to the Ministry of Public Infrastructure.

Due to the closure of the bridge, there was severe traffic congestion especially during peak hours. The Government Information Agency (GINA) spoke with some motorists who expressed satisfaction with the re-opening of the bridge.

Andy Hussein said that he resides in Sophia, but would traverse the East Coast regularly. He explained that the old bridge did not cater for pedestrians, and his clothing would become messy when he would have “to walk with traffic, now with this new bridge my skin won’t get nasty and it would be safer.”

Vinod Wellaldul, said “I travel every day selling my merchandise, and I am happy that the bridge has re-opened because it had thrown some of us out when it was closed. It looks very strong now, and I am sure that it won’t need any repairs anytime soon.”

Jenue (only name provided) expressed happiness that the bridge has re-opened but noted that it was a lengthy repair process.

Additionally, repairs to the bridge provided opportunities for Civil Engineers from the University of Guyana for work attachment. Ricardo Phillips one of the students on attachment said that the experience has been ‘one of a kind’. He pointed out that he was responsible for overseeing and hopes that he can build a lot more bridges for the country. 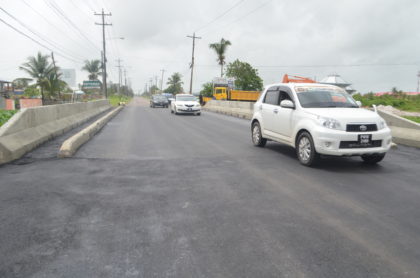