Myths and legends of our ancestors

The inaugural ‘Indigenous Storytelling Festival’ is slated for this weekend in the Moruca Sub-District, Region 1. The event will see over two dozen Indigenous communities gathering in Santa Rosa from November 16-17 under the theme “One people, many languages, embracing our cultural identity.” 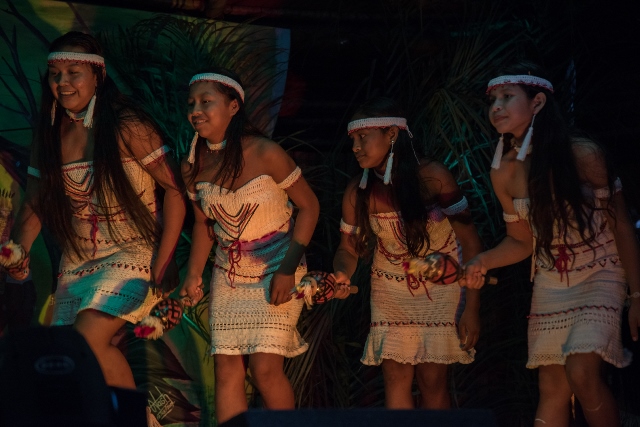 [Flashback] A group performing at this year’s cultural extravaganza at the Sophia Exhibition Centre, during Indigenous Heritage Month.

The event will feature storytelling, dances, poems and skits depicting the Indigenous culture and way of life.

“This is something unique; this is bringing out the identity of the Indigenous people,” Minister within the Ministry of Indigenous Peoples’ Affairs, Hon. Valerie Garrido-Lowe stated.

The minister was at the time speaking on National Communications Network’s (NCN) radio programme ‘INSIGHT’.

According to Minister Garrido-Lowe, the festival is in keeping with the ‘International Year of Indigenous Languages’ as declared by the United Nations and was conceptualised to promote and preserve the Indigenous languages.

A church service will precede the festival after which it will be officially opened by the Toshao of Santa Rosa. Several Indigenous games will be played leading up to the main event – the storytelling segment.

“Each village will be performing a minimum of two items. So, it is either a story, a poem or a dance… of course, the judges will be there… So, it will be an exciting time.”

She added that the “villages will bring their stories of when the villages were established, who established the villages, and right there, I think many people will learn more about their families.”

The festival will also highlight those persons who played vital roles in the development of the various Indigenous villages.

There will also be incentives for spectators who can converse in their native language.

Describing the Storytelling Festival as an enlightening experience for all, Minister Garrido-Lowe said the government’s effort to promote Guyana’s Indigenous languages has been well received by the Indigenous Peoples.

“I think our people are proud of our languages,” Minister Garrido-Lowe said.