The Ministry of Natural Resources through the Guyana Geology and Mines Commission (GGMC), partnered with the Ministry of Communities and the Environmental Protection Agency (EPA) to undertake a community outreach in Itaballi Village, Lower Mazaruni, which included a clean-up exercise and the rehabilitation of the refuse dump in the community from October 18-23, 2016.

The exercise stemmed from a request made by the Chairperson of the Community Development Council of Itaballi Mrs. Coleen Singh for a clean-up of the community and the rehabilitation of their dumpsite. Mrs. Singh had reported the serious garbage issues in the community during a meeting with Senior Environmental Officer at the GGMC Darcy Walrond and staff of the EPA. 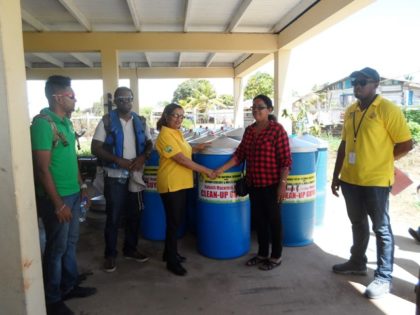 The GGMC supported the activity by spearheading the clean-up of the Itaballi Landing by giving the community 100 packs of garbage bags and 40 garbage drums.

On October 18, 2016, a team of two persons from the GGMC – Senior Environmental Officer 1 Quincy Thom and Field Assistant William Henry – departed Georgetown for Itaballi to coordinate the “Clean up Guyana” campaign.

Mines Officer Jomo Glen and Community Mines Ranger Ricky Hicks of the GGMC’s Mines Inspectorate Unit who were stationed at the Itaballi Checkpoint supported the team.

While there was a specific dumping site for garbage at Itaballi, it needed much rehabilitative work as residents, shopkeepers and miners 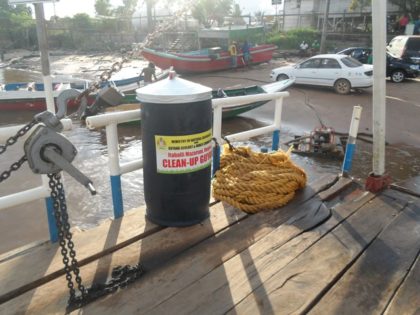 disposed of their garbage in a haphazard manner at the Landing.

The third and final phase of this exercise included a massive clean-up of the Itaballi Community organised by the CDC and was heavily supported by community members.

Following the clean-up a meeting was held at the Itaballi Community Centre, where EPA further presented on the Litter Act and its Regulations and the GGMC handed over 40 garbage bins to the CDC.

It was recommended at the end of the exercise that the CDC and RDC of Bartica jointly monitor and maintain the garbage disposal site at Itaballi; that the renewal of business licenses at Itaballi be contingent upon the satisfaction of the RDC and CDC that the applicant has maintained sanitary conditions at their place of business; and that the pickup and disposal of garbage at the site be more organised.