Georgetown, Guyana – (February 16, 2017) Minister of State, Mr. Joseph Harmon, yesterday, met with Professor of Social Epidemiology and Nutrition at the King’s College in London, Dr. Seromanie Harding, who is working in collaboration with the University of Guyana (UG) and other health practitioners here in Guyana, to build capacity for the reduction of Non-Communicable Diseases (NCDs), through religious bodies and organisations. 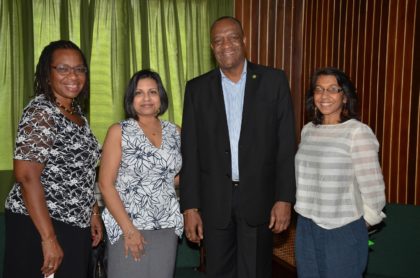 From left: Director of the Tropical Medicine Research Institute, Dr. T. Alafia Samuels, Coordinator of the Master of Public Health Programme at the University of Guyana, Dr. Reeta Gobin, Minister of State, Mr. Joseph Harmon and Professor of Social Epidemiology and Nutrition at the King’s College in London, Dr. Seromanie Harding

The Professor, who was accompanied by Director of the Tropical Medicine Research Institute, Dr. Alafia Samuels and Coordinator of the Master of Public Health Programme at UG, Dr. Reeta Gobin, said that the project is aimed at creating an interface between places of worship and the primary healthcare system, so that education, awareness and other forms of prevention can be transmitted.

“It is a research study to evaluate the impact to produce the blueprint, which if it works, will then be used for upscaling by the Ministry of Public Health. The Project is called Congregations Taking Action Against NCDS. The idea here is to exploit religious capital in communities to drive behaviour change. What has never been tried before is how we can use this to strengthen the health service and that is a novelty here. We are trying to create an interface between the two,” she said.

Professor Harding said that Guyana was chosen since it presents an ideal research area, given its cultural, ethnic and religious background. “Guyana has religious diversity and this is interesting because we have harmony between religions and we are trying to see how it works within the various religious settings and we are trying to see what work best in what setting in terms of shifting behaviour change,” she said.

Director of the Tropical Medicine Research Institute, Dr. Alafia Samuels disclosed that Guyana is the leading country in the Western hemisphere for premature deaths in relation to cardiovascular diseases. This, she said, is a major cause for concern. “We really are encouraged to be here to be doing a project that will address this major problem. We are working with University of Guyana and once we would have achieved success, we would like to roll the project out across the entire country,” Dr. Samuels said.

Meanwhile, Minister Harmon said that the Government is cognizant of the need for expertise and help in tackling such issues and wholeheartedly welcomes the project. 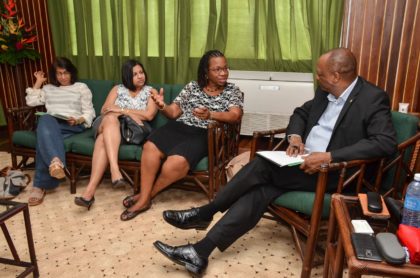 Minister of State, Mr. Joseph Harmon in conversation with the visiting delegation at the Ministry of the Presidency

here in Guyana to address them. So as much collaboration as we can have with regional institutions, international institutions, we have to support it and we are going to encourage that kind of collaboration.  At the level of the Cabinet; Cabinet gave its agreement that we should support it and you can be assured of Government’s support to this,” Minister Harmon said.

As Guyana prepares to host the Twenty Eight Intersessional Meeting of the Conference of Heads of Government of the Caribbean Community (CARICOM)tomorrow, it is expected that health related issues affecting the development of the Region, specifically NCDS, the regional response to HIV and AIDS, and the Every Caribbean Girl, Every Caribbean Woman Initiative (ECGECW), will all be addressed.

At the Thirty-Seventh Regular Meeting of the Conference of Heads of Government of CARICOM, which was held in Guyana last July, the Heads of Government said that they have recognised the progress made in addressing the issue. They acknowledged, however, that progress was variable and agreed to adopt a more holistic approach. In this regard, they pledged to address issues such as the banning of smoking in public places; trade related measures; banning advertisement of potentially harmful foods, which specifically target children; and elevating taxes on foods high in sugar, salt and trans-fats.