After operating for nearly three years without a Board of Directors, Minister of Public Works, Hon. Bishop Juan Edghill has charged the new Board for the Demerara Harbour Bridge Corporation (DHBC) to find solutions to the challenges within the entity.

The Minister delivered his charge during the Board’s installation on Friday. 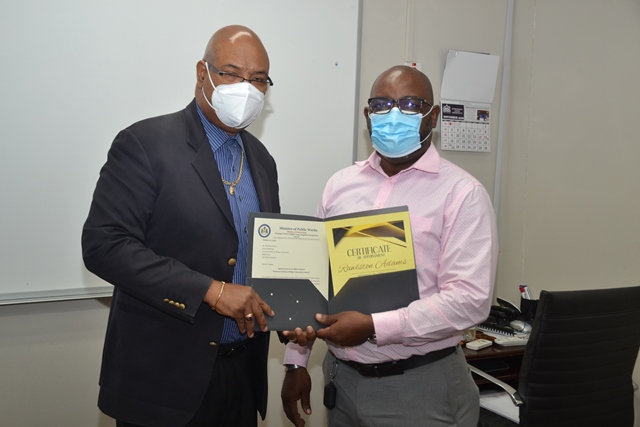 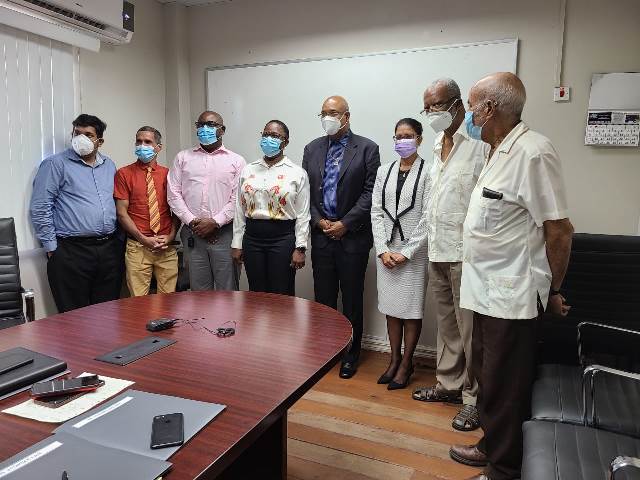 Minister of Public Works, Hon. Bishop Juan Edghill and the Board of Directors of the Demerara Harbour Bridge Corporation.

Minister Edghill also disclosed that a pontoon service is being pursued to mitigate the risk posed by heavy-laden trucks that traverse the bridge.

“The discussion has gone to the point whether they cross empty to go to the sand pits and when they are laden, they go on the pontoon, which would make their roundtrips faster,” Minister Edghill announced.

To this end, he said, “We have examined several sites on both the east and on the west sides of the river to see where we can find points to launch the pontoon service.”

Government has engaged operators of pontoon services to meet a tenable resolution for truckers.

Currently, the weight limit for trucks is 18 tonnes.

Nearly $100 million was expended to fix the retractor spans of the bridge shortly after the Administration took office, with other sections in need of attention or risk further damage.

As such, he urged the directors to address the situation.

The Minister is also pursuing solutions to the early morning and afternoon traffic snarl.

He has engaged the shipping associating, shipping agents and the DHBC to find a solution to make the bridge available to vehicular traffic from 3pm until nearly 8pm without interruptions for retraction.

“We can safely say to the people of the westside, people on the East Bank, people coming and going to the airport or heading out to Region 10 that by 3pm every afternoon, whatever is the condition or the tide, we would have completed allowing the ships to pass through the channels, close the bridge and open it to vehicular traffic,” he explained.

The Minister urged the newly installed directors to work in the best interest of the country and to employ sound decision-making at the DHBC board.

Mr. Ravi Ramcharitar was appointed Chairman of the Board and former Member of Parliament, Mr. Odinga Lumumba, Vice Chairman.