He said there might well be some misunderstanding of the VAT Act in some quarters. 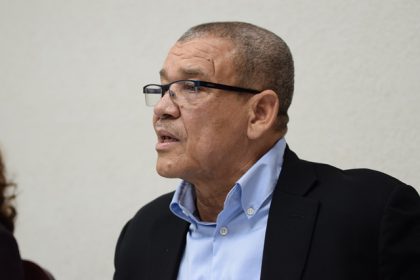 Statia responded to a false report in the Guyana Times Newspaper which followed a release from the Private Sector Commission.

GREMA had written to Minister of Finance Winston Jordan earlier this month, seeking clarification on exports. The Minister responded, advising the association that they should supply the GRA with the empirical evidence to show that VAT is indeed placed on exports and to support their claims of significant losses on costs due to the changes from zero-rated status to exempt status by the 2017 amendments to the VAT Act.

“All I am asking is if you are saying that you would be adversely affected, prove it to me, show me the facts,” the CG said.

“I would like to lay rest, that there is no VAT on exports. I am asking the PSC chairman to show me the facts,” the Commissioner General challenged.

According to the Commissioner General, the changes in the VAT Act in 2017, was an attempt to minimise a request for refunds. GRA then moved zero-rated items to exempt and vice versa.

The Finance Minister in his budget speech late last year had assured that none of the proposed amendments to the ACT, would negatively impact any individual or business.

According to the Statia, the request to the GREMA was made in light of the previous initiatives taken to exempt the raw materials and other items used in the rice industry to reduce the burden of VAT.

Regarding the contention that the government has disallowed exporters the right to reclaim the VAT paid on inputs used to produce goods and services, Statia explained that since the implementation of VAT in 2007, only exempted goods exported from Guyana would not reclaim input VAT.

He said the government had previously used zero-rated goods to lower the tax burden on low-income households by zero-rating essential goods. For items with no value added or that are the first in the chain, there is no difference to the consumer between exempting and zero-rating the items.