ONLY GUYANA CAN FIX TIMING OF ELECTIONS

Jul 14, 2019 Government, Ministry of the Presidency, My Turn, Office of the Prime Minister, OP-ED

THE Caribbean Court of Justice (CCJ) has affirmed Guyana’s sovereign right to fix a date for elections, which would make Friday, July 12, 2019 a day that I would remember as “Judicial Sovereignty Day.”

The court rightly rejected the invitation from the Opposition to usurp the powers which the Guyana Constitution “invests in the President and the National Assembly (and implicitly in GECOM), responsibilities that impact on the precise time of the elections which must be held”.

NO WINNERS OR LOSERS
While I would rather not see winners and losers in what one lawyer described as a “war” over interpretation of our Constitution following passage of the no- confidence motion against the Guyana Government, it became evident that the Opposition didn’t get the result that it had wanted.

It wanted the CCJ to fix a date for new elections, which it erroneously touted to be on or by September 18, 2019 – just above two months away. But in his erudite but measured judgment, Justice Adrian Saunders declared: “It is not, for example, the role of the Court to establish a date on or by which the elections must be held, or to lay down timelines and deadlines that, in principle, are the preserve of political actors guided by constitutional imperatives.”

The CCJ President declared with purposive authority that the Court would not instruct the President, the National Assembly and GECOM “on how they must act.” His Lordship stated that while an election should be held within three months of the valid passage of a no-confidence motion, or such longer period as the National Assembly could determine, he unequivocally affirmed that “(T)he Guyana Elections Commission (GECOM) has the responsibility to conduct that election.”

GECOM HEADLESS
But as I write, the Elections Commission, which is charged by the Constitution with the responsibility of holding elections, is headless. Reminiscent of the use during medieval times of the guillotine, the head of the last Chairman fell at the behest of the Opposition that successfully canvassed that the process by which he had been appointed was flawed.
No new chairman has been appointed. The Opposition Leader is yet to submit a list of six persons not unacceptable to the President from among whom one could be appointed.
Under directives from the CCJ, the Government and Opposition were engaged in hammering out nominees who are eligible for appointment, but it appears that that process was stalled. The CCJ has advised on a consensual approach that would give the president a role in the identification of nominees, but the Opposition might be walking back on the undertaking that the President could suggest or submit names.

CONSENSUAL APPROACH
When the Guyanese leaders embarked on that “consensual approach” the CCJ must have felt vindicated that the recommended process could work, and that the President and the Leader of the Opposition could conclude the process of appointing a new GECOM Chairman, which it sees as “a matter of the greatest public importance.”

President Granger wants this process to conclude by tomorrow, and it is hoped that this could happen soonest after the Leader of Opposition formally submits a list consisting of six nominees who are not unacceptable to the President.

It is only after the commission is properly composed, and begins to function that any movement towards fresh elections would have meaning. It is the Elections Commission that has to ensure that there is a credible voters list, and it has to present to the President a work plan with a time-frame within which the list could be verified.

At the heart of the refusal of the Court to intermingle in the electoral process, is the belief that the Guyanese political actors could deliver free, fair and credible elections in Guyana. By throwing the electoral ball back to these players, the CCJ has opened wide the doors in Guyana for parliamentary, representative and participatory democracy. It would require astute leadership in this period to keep these doors open.

The CCJ has now put finality to the judicial processes, and has vested confidence in our national leaders and our institutions to do what is right. In affirmation of our sovereignty, Justice Saunders stated: “Due observance of constitutional democracy and the rule of law in Guyana rests, in large measure, with the conduct of the various branches of government, that is, the President and the Cabinet, the Parliament and the Judiciary. All must be faithful to the spirit and letter of the Constitution and operate within the parameters given to each by the Constitution.”

CALM AND CONFIDENCE
If any thing could be said about the past seven months, one thing stands out as truthful, that is, Guyana has navigated the perilous political and constitutional waters with calm and confidence. The coalition government in the interim between the no-confidence vote and the final pronouncements by the Court has carried out its routine functions in the public interest without excesses or arbitrariness, and has engaged the parliamentary opposition on the way forward.

It is expected that parliament could determine by a motion how soon elections can be held, after the re-constituted GECOM provides a time-frame for preparation of a voters list. There is no need for political one-upmanship, as any positive outcome would give a clear message that our political leaders could find common ground in the national interest, and could cooperate and work together.

It should be expected that some detractors would impute betrayal in the face of unreasonable expectations that elections should be held within the next 60 days, and that the Court did not so rule. If it did, there would have been charges of “judicial over-reach.”
In the end, our judiciary has asserted its independence, in spite of occasional criticisms. This is to be expected, as Lord Atkin admonished, “Justice is not a cloistered virtue. She must be allowed to suffer the scrutiny and respectful, even if outspoken, comments of ordinary men.” 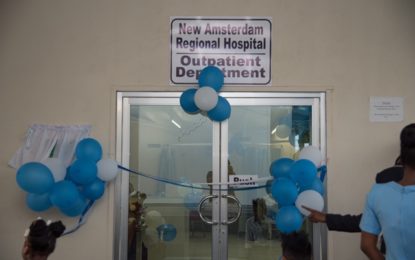 Nursing – A mission of the heart