Opposition Leader, Bharrat Jagdeo said that his party would support Government in its effort to seek a juridical settlement to the border controversy with Venezuela.

The Opposition Leader’s statement comes just a day after Foreign Affairs Minister Carl Greenidge told the House that an outcome was expected shortly, from the outgoing United Nations (UN) Secretary General, Ban-ki-moon on the issue.

Addressing the House, this morning, Jagdeo said that whatever the outcome, “We in the People’s Progressive Party Civic (PPP/C) will be supportive. We have a national position on this matter and that will not change,” Jagdeo said. 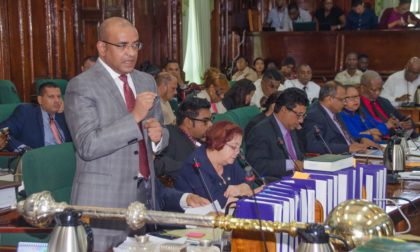 Jagdeo, who expressed hope that the outcome will be “a favourable one for Guyana,” also said that he hopes that the Government has had serious discussions on the issue and has examined “all the likely possibilities that may emerge from the process.”

He said that, “should we succeed in getting the support of the Secretary General to advance our cause through a juridical process then we would have achieved the outcome that we sought.” He warned however, “that should we not get that outcome, and the matter is delayed further, then this may embolden Venezuela to think that they could be a bit more adventurous on this matter.”

Jagdeo warned that recent statements emitted from the Union of South American Nations (UNASUR) and other places, in addition to agreement that Trinidad and Tobago recently signed with Venezuela, for their development of their gas resources, offshore, have major implications for Guyana.

“I am hopeful that the Government is paying serious attention to ensure that if the outcome is not the one that we desire that this does not inure to the detriment of Guyana, and that we take urgent steps to address through diplomatic means, the likely fallout of such a process,” he said.

Jagdeo also called on Government to restate with Trinidad and Tobago, Guyana’s objection to any action on their part that may infringe on Guyana’s maritime space and   sovereignty.