His Excellency President David Granger has been described as the leader to further develop Guyana. This was the view expressed by the Minister of Public Security Hon. Khemraj Ramjattan to residents of Novar/Dundee in the Mahaica-Berbice region during a community meeting at.

The Minister said over the 23 years under the previous administration, Guyana was spiralling downwards. “All the murders, so many robberies, so many piracy attacks. Every day a boat was stolen on the high seas. You know about those times,” he told the residents. 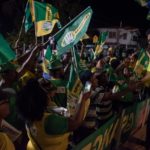 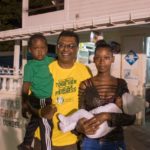 Minister of Public Security Khemraj Ramjattan interacting with the people of Novar/Dundee. 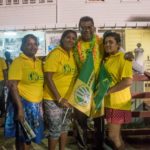 Minister of Public Security Khemraj Ramjattan interacting with the people of Novar/Dundee.

Now that Guyana is an oil-producing nation, The Public Security Minister underscored that the country’s natural resources must be managed by a trustworthy administration. Reminding the residents of the tremendous debt the Coalition inherited from the previous administration Minister Ramjattan said the opposition cannot be trusted to manage these monies for the good of the people.

However, the Minister stated, under the David Granger-led administration, the resources will be in good hands. “Our President David Arthur Granger is a man of vision.”

He assured that the $62.Billion (US$300M) that Guyana will receive this year alone from the oil and gas industry, “will be spent wisely on the Guyanese people.”

Minister Ramjattan noted that the Decade of Development as laid out by President Granger will see Guyana experiencing major development taking place throughout Guyana.

In addition to that, based on the 2019 report from the International Monetary Fund (IMF), Guyana’s economy is expected to grow by 86 percent, a massive increase from the 4.4 it grew in 2019.

Further, the Transparency International 2019 Corruption Perception Index (CPI) saw Guyana getting a score of 40 out of 100. The 2019 report lists Guyana among three countries that saw a significant change in its score on the Corruption Perception Index between 2014 and 2019.  The 2019 report also ranks Guyana at 85 out of 180 countries, representing Guyana’s best showing in the report in the past 15 years.

“We will ensure that a good life is enjoyed by all citizens when that revenue stream comes. We will ensure that visionary leadership is provided, we will ensure a secure stable Guyana and cut the crime rate even further down. We feel that we have the opportunity now and you must not let that opportunity go amiss.” Minister Ramjattan told the Novar/Dundee residents.

“I urge that you make your decisions wisely; your decision on March 2 is going to determine what this country will be in 15 years to come. The right decisions made today will be the basis for a brighter Guyana tomorrow,” Minister Ramjattan emphasised.