The Guyana Police Force (GPF) has facilitated reconstructive surgery for one of its members who sustained a gunshot wound to the head last year. 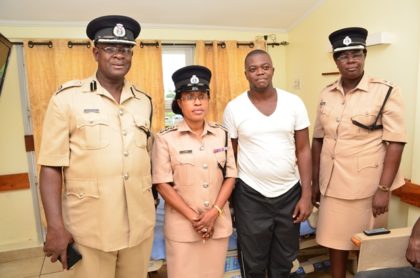 Assistant Commissioner of Operations Christopher Griffith, Deputy Superintendent of Police and Welfare Officer of the GPF Loreine Saul and DSM Maxine Graham with Victor Faucette in his hospital room.

Victor Faucette, 25, was stationed at the Wisroc Police Outpost when he sustained the critical wound last June.  The policeman was booking an assailant when a confrontation ensued and Faucette was shot in his head by the assailant, with his (Faucette’s) service revolver.

Saul pointed out that the reconstructive surgery was offered free of cost since it was reportedly the first of its kind. 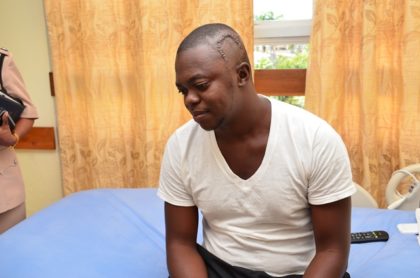 “The scalp was damaged so he had to do a replacement or temporary scalp to cushion the brain,” Saul explained. Faucette further explained that a titanium plate has been implanted in his head to protect the brain.

The successful surgery was completed on Saturday, August 28.

Faucette said he feels better and is looking forward to returning to duty.

The GPF has absolved all expenses for Faucette and supports his family as he continues his recovery, Saul pointed out.

Faucette praised the doctors, the GPF and his family and expressed gratitude for their support.