– to erase all barriers to delivering service to the people

His Excellency Dr. Mohamed Irfaan Ali is on a mission to remove the bureaucracy that hinders citizens from accessing basic public services.

To date, President Ali has held two outreaches which attracted hundreds of residents in Regions Two and Six.  The President organised an intimate setting that allowed residents to speak directly to him and have their issues address immediately, if possible.

Some residents said they have been waiting for several months, and even years, to have matters ranging from National Insurance Scheme (NIS) benefits, frequent blackouts, challenges with agriculture, and house lot allocations addressed.

Housing was a major issue at both outreaches. After hearing citizens complain about the sloth in the sector, over the past five years, the PPP/C Government made it a priority programme. Even while on the hustings, the PPP/C pledged that once it entered office it would make available 50,000 house lots to residents countrywide.

Region two resident, Ms. Pratima Sookdeo, a single mother, said it has been nearly a decade since she applied for a house lot. The woman explained that she lost her home to a fire around the same time and has been renting ever since.

After the President intervened, Ms. Sookdeo received the title for her land.  “I am so happy.  I am so happy because I am a single mother of two children and I have nowhere to put them. I am so happy and thankful,” she said. 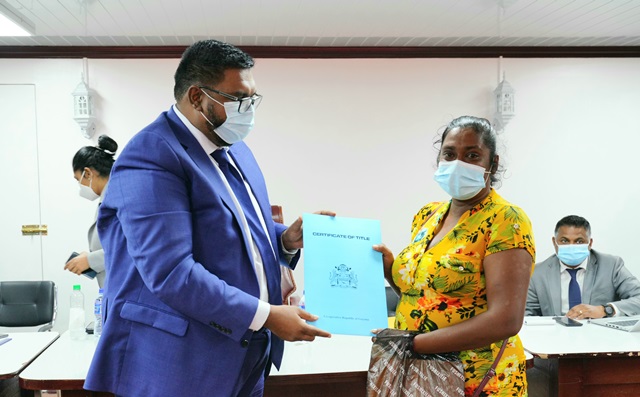 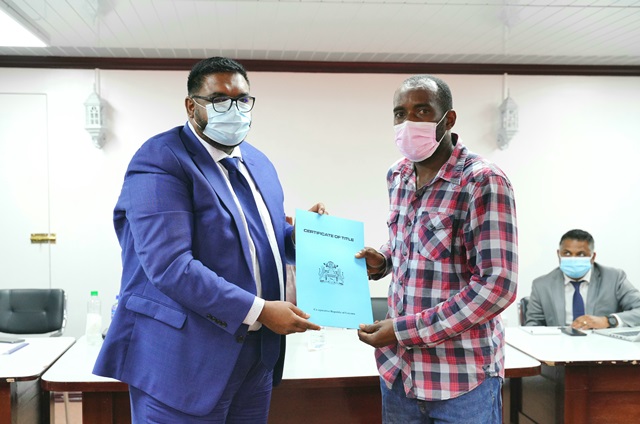 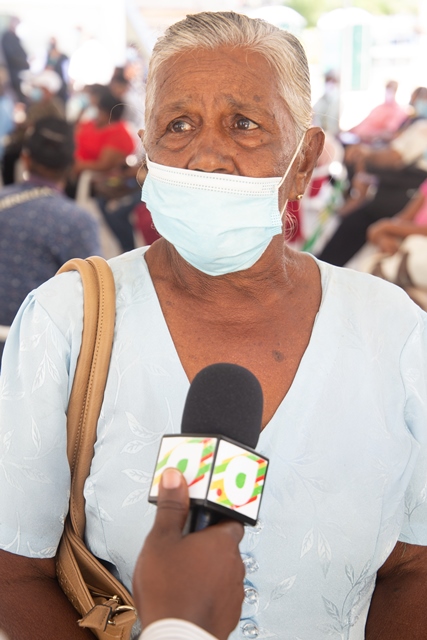 Mr. Essan Garraway who applied for his house lot in 2015, also received his document. “I feel thankful for the transport because my daughter will get to go to school. She is a very bright girl, she brought third for the Region and first for Hampton Court Primary… I want to say thanks to the President and continue doing good,” he said.

So far, President Ali’s robust leadership in this sector has resulted in the distribution of about 600 land titles and transports in Regions Three, Four, Six and Nine, and over 1,000 land allocations in Region Four.

Less than one week after the President’s outreach in Region Two, 91 residents received titles for their house lots. Minister of Housing and Water Hon. Collin Croal and Minister within the Ministry of Housing, Hon. Susan Rodrigues delivered the titles to residents.

President Ali also addressed matters relating to NIS benefits. After several residents raised similar concerns about accessing their benefits, the President instructed General Manager of the NIS, Ms. Holly Greaves to address the bureaucracy in the system that has hampered persons being served.

Region Six resident, Mr. Sase Narine explained to the Head of State that he had been trying to secure his brother’s pension from the NIS for several years.  President Ali resolved the matter within minutes.

Mr. Narine said he was satisfied that the President had addressed the matter.  “My brother has $769,000 contribution so the President asked the NIS manager how much contribution you need to qualify. She said, ‘$750 000’.  He asked, ‘Is the man qualified?’ She said, ‘Yes’. So, he asked, ‘Why are you preventing him from getting his money?’ This is an excellent job, more than excellent. We deserve this more often because a lot of people were suffering,” Mr. Narine said.

Meanwhile, at the end of every engagement with citizens Dr. Ali said he was pleased to be able to provide timely solutions to their matters.

“What it tells us is that the issues of the people are resolvable, but sometimes the bureaucracy does not allow us to resolve it. That is why these outreaches, we want the Head of every agency, so you can make an assessment and know what areas of improvement the agency requires itself,” he said.

The President added that “What we have to do is have more coordination and break down the barriers of Government and that is what we want to achieve through these outreaches. In many instances, if there is a less bureaucratic mode of communication from the region to agencies like the NDIA, Lands and Surveys, NIS, Central Housing and Planning Authority then many of these issues can be resolved.”

President Ali reminded the heads of agencies and department at the outreaches that the Government’s mandate is service to people. Further, in order to ensure that citizens’ concerns do not fall on deaf ears, Regional Rapid Response technical teams were established.

The President charged the teams to probe and resolve matters at the community level. The teams will be headed by the Regional Chairman of each region.