His ExcellencyDr. Mohamed Irfaan Ali, President of the Cooperative Republic of Guyana, today, receivedthe first of two newly minted commemorative coins, which were commissioned in observance of Guyana’s 50th Republic Anniversary from the Governor of the Bank of Guyana, Dr. Gobin Ganga.

At a simple ceremony held at State House, Dr. Ganga said preparations for the production and issue of the coins began in October 2019 and were to be presented in February 2020. However, due to the challenges of the Novel Coronavirus Disease 2019 (COVID-19) pandemic, this was delayed. As customary though, Dr. Ganga said that the first coins are presented to the President before they are distributed.

The first of the coins is a $10,000 commemorative coin struck in 99.99 per cent pure silver with selective gold plating. This issue is limited to 1,500 pieces. The second is a $100 coin struck in multiply nickel, issued at face value with a circulation limit of 500,000 pieces.

“This is the first ever painted coin to be issued by the Bank. Our numismatic designs as always, seek to highlight points of national pride and these coins, minted by the Royal Canadian Mint, feature the 50th Republic Anniversary Logo on the reverse and the Coat of Arms on the obverse. It features the Mace, a ceremonial symbol of authority in Parliament, superimposed on the backdrop of the number 50, which is decorated in the colours of the Golden Arrowhead. Around this, the words “Guyana Together – Reflect, Celebrate, Transform” is present.

This logo is rendered in gold plating on the $10,000 coin and painted in full colours on the $100 coin. The coins will be officially unveiled on Wednesday by the Bank of Guyana. 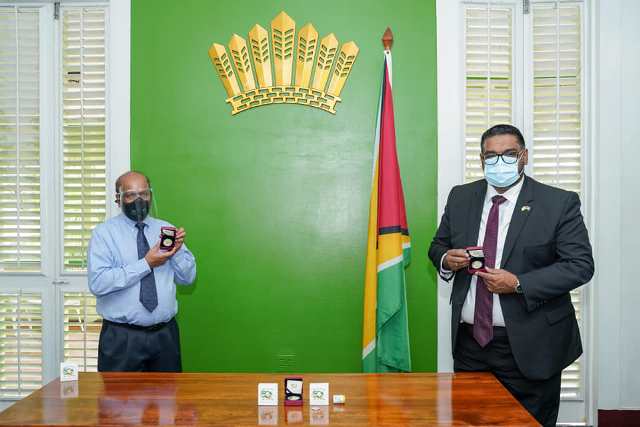 His Excellency, Dr. Irfaan Ali, President of the Cooperative Republic of Guyana, and Dr. Gobin Ganga, Governor of the Bank of Guyana show off the two commemorative coins at State House, this morning 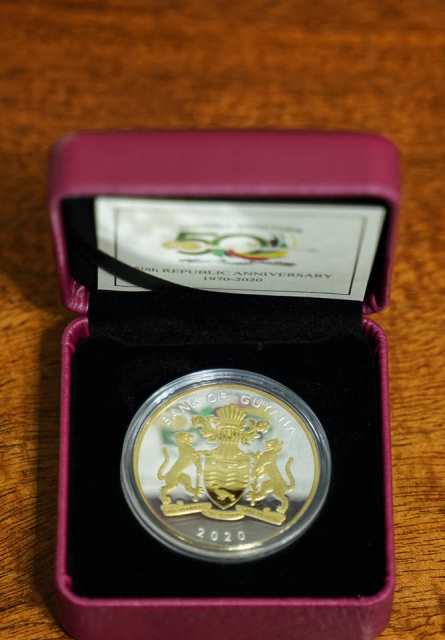 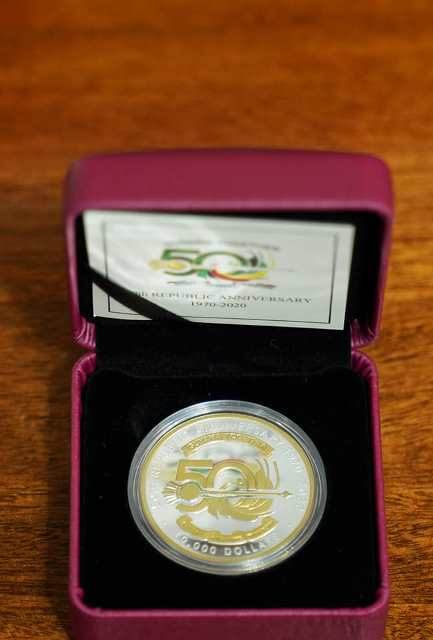