President David Granger says the rule of law must be fortified in the fight against terrorist financing and money laundering if it is to be successful.

The Head of State, who was delivering remarks at the opening of the Caribbean Financial Action task Force Judges and Prosecutors Conference today pointed out that the Caribbean, given its geographic location has become a haven for financial pirates, privateers, money launderers and tax evaders. 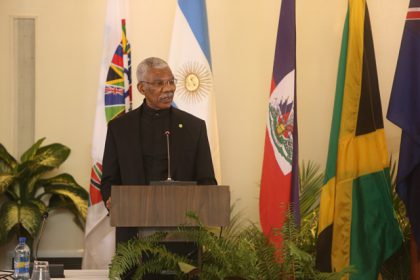 President Granger addressing the gathering at the CFATF Judges and Prosecutors Conference.

Present day criminal cartels, he noted possess the means to corrupt public officials and the motivation to undermine the institutions that uphold the rule of law.

“Present day Information Communication Technologies can facilitate the transfer of financial assets across borders at the speed of light. Illicit transactions can contaminate the voluminous transactions which take place in our countries financial systems,” the President said.

In this regard, the Head of State stressed the importance of safeguarding the criminal justice system of states from the subversion of organised crime.

Robust legislation and sturdy institutions the President said are the “weapons” that can protect states from these illicit and destabilising activities.

Reference was made to Guyana’s efforts in countering money laundering and other financial crimes which started some 18 years ago with the passage of key legislation.

The President said that “such legislation has corrected deficiencies in the anti-money laundering and countering the financing of terrorism regime and allowed for the compliance with the standards imposed by the Caribbean Financial Action Task Force.”

The Bank of Guyana, the Financial Intelligence Unit and the Office of the Director of Public Prosecution have been empowered with autonomy and equipped with the technical resources and personnel to discharge their functions in accordance with the AML/CFT legislation.

He spoke of the limitations in technology and human resources in smaller Caribbean States, which can impair the law enforcement capabilities to combat transnational criminal cartels.

President Granger alluded to intensified international collaboration as the possible solution for these smaller states.

The Conference therefore offers the opportunity for Caribbean jurisdictions to strengthen measures for the continuous sharing of intelligence and best practices.

The CFATF Workshop for Judges and Prosecutors is a collaboration with the Commonwealth Secretariat, Caribbean Development Bank and the Cooperative Republic of Guyana.