President meets new Consul General to Nickerie, Suriname -as she prepares to embark on her new role

Georgetown, Guyana – (June 17, 2016) President David Granger, yesterday, met with the new Consul General to Nickerie, Suriname, Ms. Esther Griffith, at the Ministry of the Presidency, where he outlined his expectations as she takes up her new role.

Ms. Griffith, who has served at the Ministry of Foreign Affairs as Chief of Protocol, will depart Guyana tomorrow for Nickerie. She will immediately assume duties.

During the meeting, the President extended felicitations to Ms. Griffith on her appointment and delved into a brief history of the relationship between the two countries, before explicitly outlining his vision of what must be achieved by the Consulate General’s Office. Guyana and Suriname have shared diplomatic ties since 1975.

In an invited comment, Ms. Griffith, who pledged to give her best, said that she is appreciative and honoured by the confidence that the President has reposed in her. She also promised to ensure that Guyana is placed on the map in a positive light.

“His Excellency was very clear and concise in his expectations. My job will be to seek to enhance relations between Guyana and Suriname [and] work on the image of Guyanese in Nickerie. I will also be looking at tourism, bringing tourists to Guyana and His Excellency wants to ensure that we speak to investments as well,” Ms. Griffith said. 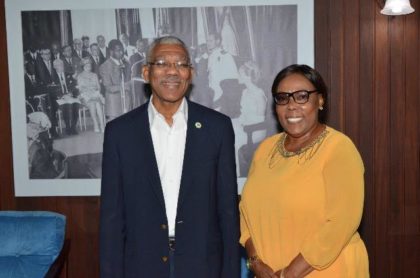 President David Granger and Ms. Esther Griffith at the Ministry of the Presidency. 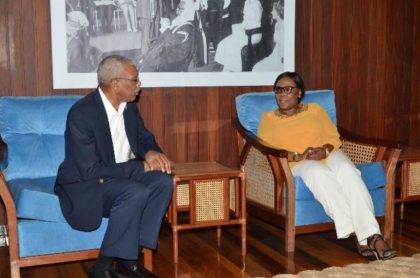