Georgetown, Guyana – (February 28, 2018) President David Granger, yesterday, accepted an official invitation to the International Solar Alliance (ISA) Founding Conference and Solar Summit from Indian High Commissioner, Mr. Venkatachalam Mahalingam and Ambassador of the French Republic to Guyana, Mr. Antoine Joly at the Ministry of the Presidency. The event, which will be held on March 11 in New Delhi, India, is being co-hosted by the Governments of India and France.

Guyana ratified the ISA Framework Agreement and is a founding member of the ISA, which was launched on November 30, 2015. It is an action-oriented international and inter-governmental organisation that aims to maximise the harnessing of solar-energy potential, modernise energy systems, universalise access to energy, accelerate economic development and alleviate poverty. 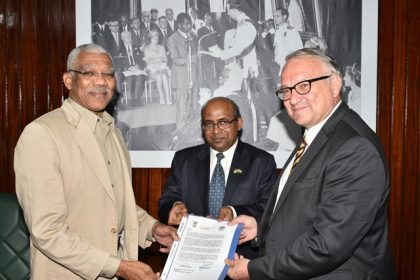