Georgetown, Guyana – (March 19, 2018) President David Granger, on Friday, announced that he will convene a region-wide conference engaging officials from the 16 Neighbourhood Democratic Councils (NDCs), the Regional Democratic Council (RDC), overseers and other regional officials of the East Berbice Corentyne Region (Region Six) with a view to addressing the problems that are being faced at the local level, so that the citizens at the community level can enjoy a higher quality of service from their respective local government organs. The Head of State said, “I am committed to local government because I believe that the whole system of administration in this country rests on the NDCs; rests at the local level…this is the level at which true democracy prevails.” 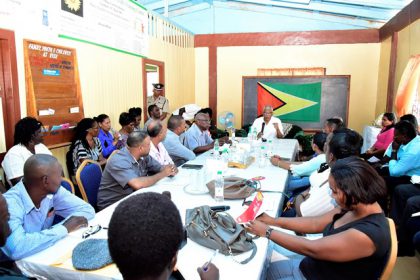 President David Granger announced that he will be convening a region-wide conference engaging officials from the 16 NDCs before the end of June.

Speaking at a meeting with NDC representatives at the Fyrish Skills Training Centre, the President explained that a new budget cycle begins on July 1 and, therefore, these discussions will serve to identify priority areas for which provisions can be made in 2019 budget. “We have to make sure that the NDC’S are not treated like some sort of sideshow or like they don’t matter; they matter. They are part of the government system which, as I said, is in three-tiered; central, regional and local and if you are part of the system and your foundation collapses, your structure will fall… I see the NDC as a dynamo not something passive, but an active organisation helping to develop these communities,” President Granger said.

Some of the burning issues raised by the NDC officials include, solid waste management, the need for an updated property valuation scale (valuation was last done in the early 80s), an increased stipend for Councillors, which is currently a meagre $3,000 per month, better road infrastructure and street lighting, training for Councillors, issues with land, the need for better quality potable water services in certain areas, recreational and other opportunities for school children and youths and the need for greater cooperation among the NDCs, residents and the RDCs.

Mr. Ravindra Dass, an Overseer at the No. 52-74 NDC, called for an increase in Central Government subvention for his NDC since it is one of the largest in the country. ”There is a fiscal arrangement that is in place based on the geographic area. I am just asking if there can be an additional sum, so that when the calculation is being done our subvention can be increase a little bit more,” he said.

President David Granger being shown a photograph of the poor quality of water residents are receiving at the Fyrish/Courtland area.

Meanwhile, Chairman of the Macedonia-Joppa NDC, Mr. Nabot Dean spoke of the need for every NDC to be in possession of the plans or land layout maps for all of the villages within the various NDCs. This, he said, will assist the NDC to monitor the land management system within the villages. “Too often, people are grabbing Government reserves and creating a lot of problems in these areas. We need to get these village plans so that we can identify the boundaries properly,” he said.

He also called for the roles and responsibilities for all the key players at the NDC to be properly defined and streamlined, noting that too often there is an overlapping of responsibilities and this creates undue controversies.

President Granger committed his Government to working with the local democratic organs to find workable solutions over the course of the next three months. He took the opportunity to call on the NDC officials to recommit to discharging their mandate, which is to provide basic services to the citizens of Guyana in an efficient manner. The President also reminded the local leaders that their performance will determine their re-election at this year’s Local Government Elections (LGEs).

“We need to develop a new approach to local government… I want to make sure that Region Six, East Berbice-Corentyne, is strong, is stable and secure. I cannot feel happy if we have these problems taking place at the grassroots level… I want to urge you, at the level of the region; at the level of central government and at the level of local government to work together. I want us to have a strong Region Six but to do that there must be participation  and cooperation and I know this is a problem but we have to overcome this none participation. We have to demonstrate to all sections of the community that we are working to build a stronger, safer more secure region,” President Granger said. 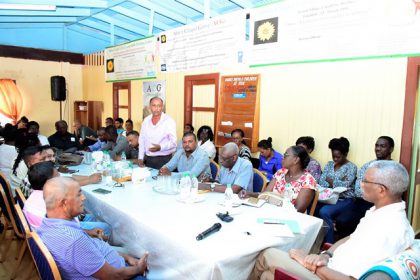 An NDC Councillor airing his concerns to President David Granger at the meeting. 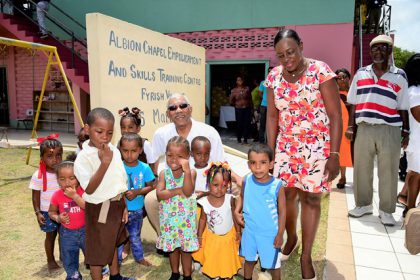 These little ones came out to the Fyrish Skills Training Centre to meet President David Granger and Minister of Education, Ms. Nicolette Henry.