–Agri. Minister commits to carrying out needs assessment of works to be done

-fertilisers, access to seeds and other planting material to be made more accessible to farmers

This was disclosed by Agriculture Minister, Hon. Zulfikar Mustapha during a recent outreach to the island, where he met some farmers who raised concerns about the need for urgent rehabilitation work to critical drainage and irrigation structures.

Minister Zulfikar Mustapha while addressing the farmers at Hogg Island 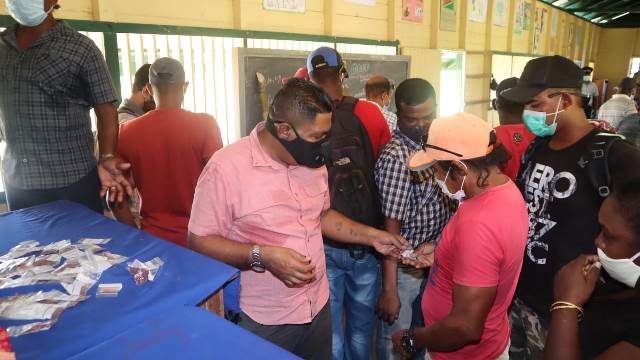 Mr. Nazim Mohammed, a Region Three Regional Democratic Councillor, said that there is need for repairs to be carried out on several structures.

“NDIA did a koker on the western end of the island, but we need another koker because going to the southern part of the island, the koker cannot take off the water. On the North, we don’t have a problem with flooding but when the rain falls heavy, it takes a longer time to discharge. We also need a bigger koker on the western end. Minister, we also have a number of koker doors in need of urgent repairs. We would also be grateful for a speedy rehabilitation of the 11 miles of canal. Six miles have already been completed and we need the additional five miles to be done. On the eastern side of Hogg Island, we need to rehabilitate those canals as well,” Mr. Mohammed said.

The Councillor also complained about the exorbitant costs farmers have to pay for seeds and fertilisers on the island.

“We know that Government has taken off the VAT from fertilisers and other agriculture inputs but by the time it gets to us, the cost of these fertilisers are still high. We have to pay $200 per bag to bring it down. If you can put some system in place to assist us, it will help tremendously. We also need markets and some seeds. We are exporting some watermelon from one part of the island but the cost of the seeds is heavy on the farmers. We are paying as much as $6,400 for a pack of watermelon seeds,” Mr. Mohammed said.

In responding to the issues raised, Minister Mustapha said his Ministry is prepared to work with residents to have their issues resolved.

“After listening to all of your issues, I want to assure you that I am committed to working with you to have your issues resolved. I have my officers here from the agencies taking notes so that we can work with you. In relation to your drainage issues, an engineer from NDIA will return to the island to meet with you to carry out a needs assessment and provide me with a report in one week. I know that NDIA has a machine here that needs some amount of repairs. I will ask the engineer to send another machine to the island until the works have been completed. We will also work with you to get the machine you have here fixed properly and procure the parts needed to ensure the repairs are done correctly. From there, we will be able to execute projects based on their urgency. The comrade raised the issue about land leases. My office will consult with the Guyana Lands and Surveys Commission so that their officers can meet with you to have these issues resolved,” Minister Mustapha said.

Minister Mustapha also committed to working with the farmers to set up a system so that they can access seeds and other agriculture inputs like fertilisers on the island at a more affordable cost.

Addressing the issue of markets for farmers’ crops, Minister Mustapha informed the farmers that Government is currently in the process of revamping the Guyana Marketing Corporation (GMC).

“We are looking at new markets for our farmers. I am having discussions right now with other agencies within Government and soon the new GMC will be tasked with the responsibility of providing markets for the farmers. When farmers don’t have regular markets for their produce, many times their produce is being dumped or it spoils. We will work with the prisons, schools, the army, the police force and the hospitals so that our farmers can benefit from the markets within these governmental agencies,” Minister Mustapha said.

Minister Mustapha also said that the Regional Democratic Council will have to play a role in these developmental works. He added that his Ministry will work with Regional officials to develop a work programme for the Region to determine the order in which projects are done.