Police Commissioner (ag) David Ramnarine said he believes the five percent increase in complaints to the Force last year, was due largely to the public’s confidence in the Guyana Police Force (GPF)’s investigative procedures. 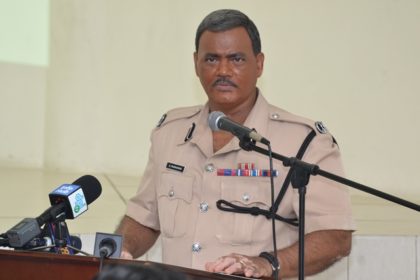 At a recent end-of-year GPF press conference, Ramnarine said, “From an external view, the office of Professional Responsibility continues to do a fine job in preserving and protecting the moral fabric of the Force. We have seen a five percent increase in complaints in 2017 with 644 (cases), as against 609 in 2016; 78 percent of the 644 has been completed.”

The Police Commissioner (ag) said as the GPF continues to work to maintain the public’s trust, it should be noted that approximately 31 members of the GPF who committed several violations were dismissed upon the completion of investigations into their matters. Those officers were charged and placed before the court.

According to Ramnarine,  the dismissal of officers in 2017 increased when compared to the amount in 2016. The Acting Commissioner explained, of the total number of complaints against officers in 2017, eight resulted in criminal charges, while 187 resulted in departmental charges. A total of 49 were deemed unsubstantiated cases, and a total of 49 ranks were warned.

Currently, Deputy Superintendent of Police, Motie Dookie, who had headed the SWAT Unit, is under investigation for smuggling 30 cases of Johnny Walker whisky.

Meanwhile, Ramnarine also revealed that there were 23 accidents in 2017 involving vehicles either owned or driven by members of the Force, which resulted in four deaths. He confirmed that the two officers who are responsible for damaging the brand-new police vehicles are currently paying for the repairs. “Apart from paying, there are departmental charges. Both ranks have been removed from their divisions,” Ramnarine said.

In one of the cases, a ‘B’ Division, Berbice rank crashed one of the vehicles that the Government of China had donated to the Guyana government. The crash occurred one day after the vehicles were handed over to the police. The rank was charged with dangerous driving and was subsequently transferred to ‘A’ Division.

Ramnarine further assured the public that the senior administration of the GPF has not waivered, and will continue to ensure that the necessary standards of professionalism are maintained among its ranks.