Residents of Region Eight were assured by the Regional Executive Officer Rafel Downes that the Regional Democratic Council (RDC) is working continuously to make their lives better. 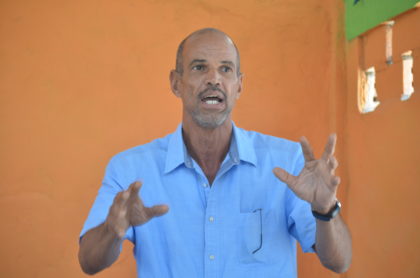 This was pledged during a meeting which was held with the residents last Saturday in Kato. The reassurance came on the heels of residents accusing the REO of not visiting the villages in the communities as often as he should.

The REO noted that it would be difficult to be frequenting all 24 villages in Region Eight, due to the fact that he has to be travelling back and forth between Georgetown and the region. The residents were also reminded that every project that is proposed by the RDC has to be approved by the Ministry of Finance’s Director of Projects.

“I would not like you to think because you see no significant project being done in your village, that we are not requesting such, that also is a terrible mistake,” Downes stated. He added that, “I would like to urge all residents here, do not take our absence as a sign as if we are not assiduously working for the benefit of everybody, it would be a mistake to think differently.”

The REO told the residents that, “I can tell you… that the Ministers and Ministry in Georgetown, they are aware of what’s going on; we all know what is happening and we are improvising, we are reconstructing, we are re-examining.”

Downes added that, “Anything that you might pass on to us, concerning your development infrastructural areas and so forth, we pass on that almost immediately,” Downes explained.

The REO noted that the Ministries and subject Ministers are very cooperative.