At the region’s flag raising ceremony in Paramakatoi, Minister of Communities, Ronald Bulkan stated that as Guyana ushers in 52 years of Independence, the administration continues to work assiduously to provide easy access to these services. 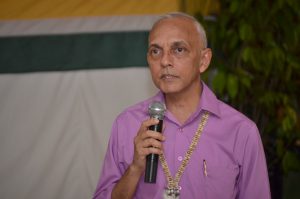 Minister of Communities addressing the gathering at the flag raising ceremony.

He noted that to ensure this is brought into fruition, the government, therefore, embraced a decentralised approach to governance. With this approach, local and regional leaders now have the opportunity to manage their respective communities, while being supported by capacity building initiatives and funding from the government

“You have the right to be involved and have concerns addressed and incorporated on the decision-making process. This administration intends to protect and respect all the rights of our people, hence we will continue to support our regions. We want to see the development of our regions,” Minister Bulkan said.

Since 2015, the region has benefited from an increased budgetary allocation. This year approximately $1.8 Billion was provided for major development projects in the region. Additionally, Mahdia will soon gain its township status which will negate the need for residents to travel to Georgetown to access government services.

“This government is committed to closing the gap between the coastland and the hinterland. Becoming an independent nation, we created our own constitution which allowed us to create our own laws that guarantee a life free from hunger, ignorance and want,” the Minister underscored.

The foundation for transformation in the region has already begun. Recently 80 percent of the roads in Mahdia were transformed from laterite roads to concrete structures. A new government compound to house government offices is underway and the Kato Secondary is slated to open in September. Other major developments are slated for the region.

The Minister urged the residents to live in love and unity as the “good life beckons. 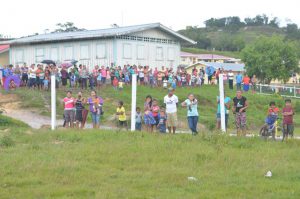 Some of the spectators gathered to witness the hoisting of the Golden Arrowhead. 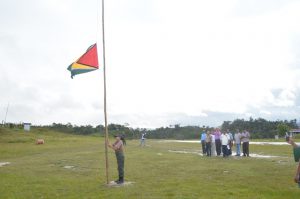 A member of the Guyana Peoples Militia hoisting the Golden Arrowhead. 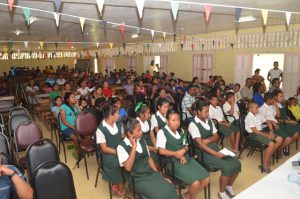 A section of the gathering at the flag raising ceremony.