The newly rehabilitated vessel M.B Sandaka is expected to provide a more efficient service to commuters. The ferry was recently outfitted with two hydro-master propulsion systems which will be powered by two caterpillar 3406 engines. Other rehabilitation works were also carried out to enhance the vessel. All works were executed by Brenco Shipping and Trading Company Ltd.

The acquisition and installation of the two engines cost a total of $291Million while rehabilitation which included painting and repairs cost an additional $13Million.

M.B Sandaka operates the Leguan to Parika route and even undertakes international duties between Guyana and Suriname whenever the M.V Canawaima is undergoing scheduled maintenance.

General Manager of the Transport and Harbour Department (T&HD) Marcelene Merchant along with her team and the contracting company today assessed the vessel.

After an incident-free test run of the ferry, Merchant said that she was very impressed with the works done on the vessel. She noted that with the installation of the new propulsion systems, the T&HD will be able to provide a more reliable and improved service to the public. 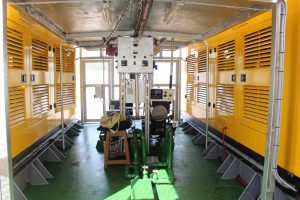 The two new engines installed on the vessel 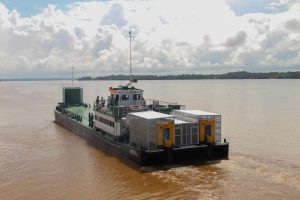 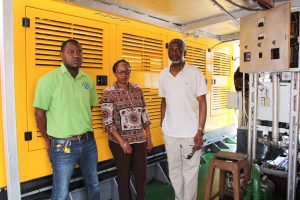 Merchant stated that “we are considering putting the vessel into operation by this weekend; which will be either on Saturday or Sunday. The vessel is now better equipped to serve the residents of Leguan and other commuters who will be travelling between Parika and Leguan.”

Additionally, Griffith pointed out that coupled with the rehabilitation of the vessel, the T&HD will also be rehabilitating the Leguan Ferry Terminal.

Traffic Manager of T&HD Stephan Skekel pointed out that with the vessel up and running, regular ferry service will be back on schedule.