Cashew Grove Park located in the township of Lethem, Region Nine, will be restored for public use before the ending of this month.

This commitment from the Hon. Raphael Trotman, Minister of Natural Resources, during his last visit to the region nearly a week ago. 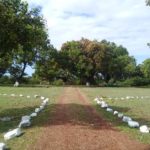 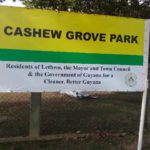 Speaking with the Department of Public Information, (DPI), Minister Trotman said the park, which was a recreation space for residents became overgrown and underused, and after seeing it several times during his visits to Lethem, he thought it was a good opportunity to be included in his Ministry’s Green Space Agenda.

“I am happy with the progress that has been made, we had volunteers, the Corps Unit, the Mayor’s Office and Regional Administration, it was a collaborative effort,” Minister Trotman relayed.

The Ministry of Natural Resources, earlier this year signed a Memorandum of Understanding, (MoU), with Conservation International, to formalise a shared commitment to pursue a green, diversified economy for Guyana.

The MoU aids, in among other areas; assisting Guyana’s efforts in meeting international commitments, like the Minamata Convention, the UN Framework Convention on Climate Change and linking natural resource management with community development.

The agreement is valid for two years with an option to renew.

The Cashew Grove exercise is also part of an initiative by the ministry called “A Clean Environment Project”, which was launched in April 2017.  This exercise has seen the several communities receiving bins, streetlights, seedlings and fruit trees, to help them promote cleanliness and green growth. Other communities also received signage, garbage bags and garden and cleaning tools including cutlasses, wheelbarrows and rakes. 15 communities have benefitted from the successful project.

The Minister has reiterated that even though his ministry focuses primarily on mining and forestry, it has taken up the mantle and made a commitment to contribute to Guyana’s Green Agenda. This is being done through the restoration of parks and by the creation of green spaces around the country.