The Maritime Administration (MARAD) of the Ministry of Public Infrastructure has engaged the services of a professional salvager to remove the dredge in the Mazaruni River. The wreckage has been there since June. 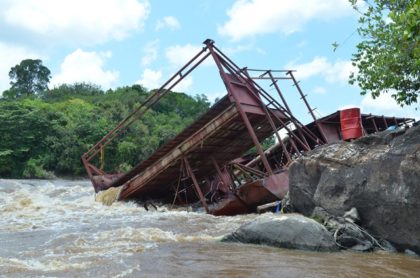 The damaged and listing Crown Mining dragga in the Mazaruni River

Acting Harbour Master, Michael Tallent visited the location of the wreckage on Saturday. He was accompanied by professional salvager, Captain Leroy Benjamin who is expected to provide an assessment report by the middle of this week.

Meanwhile, Crown Mining Company, which owns the grounded ‘dragga’ has made attempts to remove the sunken equipment.

According to Director of the company, Mahendra Persaud initial efforts were futile because of the water depth at the time of the incident.

“When we arrived, the water was about eight feet higher than it is now and we started immediately from the front to seal the compartments. Out of the 34 compartments we managed to seal 27 the (remaining) seven are below the water. The speed of the water is about 30 miles per hour and at eight feet high you can’t stand there,” Persaid told the Government Information Agency. He said the company will continue with its efforts. 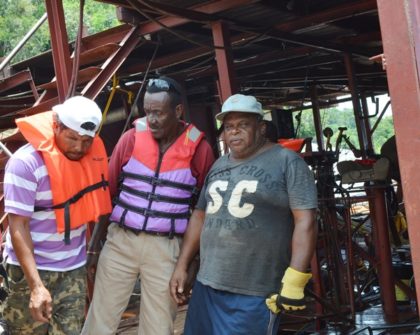 Michael Tennant (center) in discussion with one of the salvagers

“I think the owner of the ‘dragga’ is making some efforts as we can see. I think his efforts are not enough to clear the channel that is why we at the Maritime Administration Department will remove the dragga earliest,” Tallent said.

Benjamin is expected to present his findings and recommendations to the MARAD. Works should commence thereafter. There are reports that boats cannot pass due to where the wreckage is located.

The Dragga, owned by Crown Mining of North Road, Georgetown was being relocated from the Mazaruni Mining district to the Essequibo, when it ran aground in June of this year.

A dragger is a mining apparatus like unto a floating building on which is mounted hydraulic and other equipment for extracting gold and diamond from a river’s bed.