The High Commission of India is hosting a two day Sari draping demonstration and exhibition. This is in commemoration of the 100 anniversary of abolition of Indian indentureship in Guyana at the Kalyan Centre & Shopping Plaza, Lamaha Street, Georgetown. 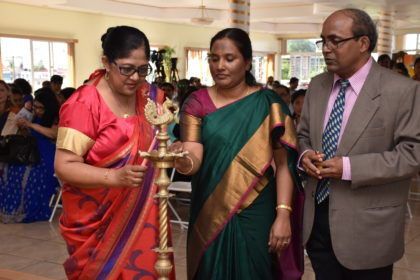 Today, Mrs. Sita Nagamootoo, wife of Prime Minister Moses Nagamootoo who gave the feature address at the opening ceremony, highlighted the first time she wore a Sari. It was in 1966 at a Diwali beauty pageant, “I can share a secret that was when my husband, now Prime Minister was captivated,” she feels the Sari had something to do with that special moment.

Mrs. Nagamootoo congratulated the Indian High Commissioner Venkatachalam Mahalingam for hosting the event; the first of its kind in Guyana. She called on women and girls to learn to embrace the Sari, for it “could be of immense help to all of us.”

High Commissioner Mahalingam explained the history of the Sari which originated within the Hindu culture; as the world’s oldest and surviving unstitched garment from the past. He noted that over the period of time it has become a sensuous and glamorous wear for women.

Prime Minister Moses Nagamootoo, speaking at another event organised by Indian High Commission to commemorate the 100 anniversary of Indian indentureship earlier this month; stated that the East Indian indentureship (which lasted between 1838 and 1917), abolition is an important event in Guyana, “In fact it reminds us of an end to a period that was characterised by cruel exploitation in the (worst) form, and bondage on the sugar plantations. The East Indians that came here as Indentured Labourers made signification contributions towards the foundations for the economic, infrastructural, social, cultural and all round development in Guyana.”

The Sari draping ceremony and exhibition was enriched with cultural poems, dances, modelling and a skit. The exhibition not only showcases how to wrap a Sari, but Indian cuisine, jewellery and other clothing will also be on sale.

The two day exhibition is being held at the Kalyan Centre & Shopping Plaza from Saturday 24 to Sunday 25, 2017. 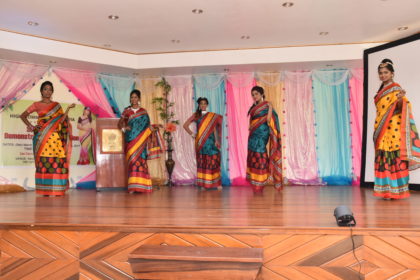 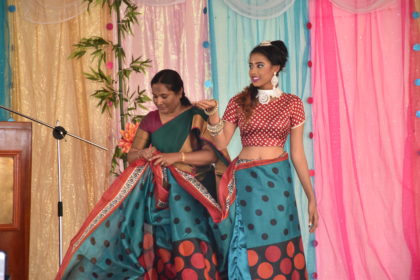 Wife of the Indian High Commission demonstrating the wrapping the Sari 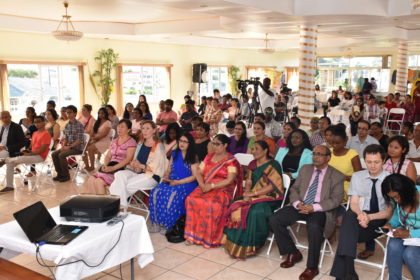 A section of the gathering at today’s Sari Draping demonstration and exhibition at the Kalyan Mall. 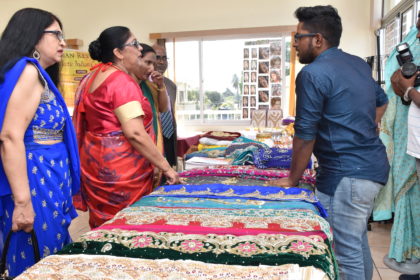 Mrs. Sita Nagamootoo, wife of Prime Minister Moses Nagamootoo at the Sari Draping demonstration and exhibition interacting with one of jewellery vendors.