St. Ignatius Secondary advances to the second leg of the JOF debating competition

St. Ignatius Secondary School of Region Nine advanced to the second leg of the JOF Haynes debating competition after surpassing their opponents Zeeburg Secondary of Region Three. The debate kicked off at the Leonora Technical and Vocational Training Centre in Region Three. 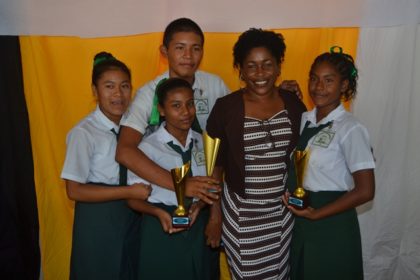 The teams debated the topic, “The convention on the rights of a child is solely responsible for the delinquent behaviours of many children in our society”. St. Ignatius Secondary the proposition team defeated Zeeburg Secondary 280 to 268 points.

Lead speaker of St. Ignatius, Avy Thony, who played an integral role in her team’s victory, said group members rehearsed intensely and deserved the win. The sixteen-year-old enjoys participating in debates and this is her eighth competition.

“It helps me to express myself in an emotional way, in a way where people can understand the aspects of different topics. It is really about my career, I would like to become a lawyer and public speaking would help by debating”, Thony explained.

Sixteen-year-old Capreace Walks of Zeeburg Secondary, who snagged the prize for best speaker, also plans to become a lawyer. The teenager spent several days rehearsing for the debate and though her school was not victorious, she is delighted with her award.

Walks, who is no stranger to the debating stage, shared some essential advice for others who may wish to participate in debates. “You have to have a love for public speaking in my view. Because though some people may want to do it, when they go up on stage, they might feel intimidated by the crowd. So if you practice in front of your mirror constantly, you will obviously find a love for debating.” 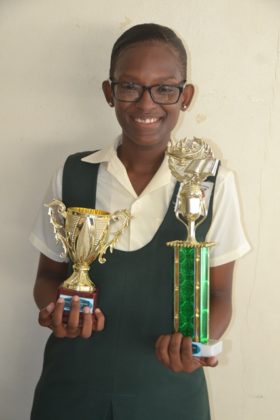 The debate was evenly matched until the rebuttal stage where both teams lost some momentum. June-Ann Gonsalves, Acting Chief Education Officer for secondary schools said there is need for improvement in this area.

“The rebuttal is what changed the debate to some extent, so we realised that at this point in time that our children will need to be prepared in how to do the rebuttals in general. How they should tackle it and how they should try using their own presentations in the rebuttals to counter what the opposition or the opposing team would have presented.”

Chief Judge of the debating competition Shandrina Welcome-Lee applauded the students for their performances. However, she noted that “They have to learn to think on their feet and think logically. In some cases, students did not perform that well but they were brave and we could see that they spent a lot of time preparing, they did research and they worked hard and their arguments were good”.

Welcome-Lee, who is also a Head Teacher at the Brickdam Secondary School, said that more needs to be done in schools to assist students with public speaking. She is encouraging English teachers to include debating exercises in their lesson plans, as it will boost the confidence of their students.

The JOF debating competition continues among secondary schools from across the country.