The Public Service and public trust

Guyana’s development demands a proficient, professional Public Service. Public servants are essential to the country’s administration because they exert direct and daily influence on the lives of Guyanese through various official agencies, boards, commissions, departments and ministries.

Citizens’ access to public services – such as public education, public health, public infrastructure, public security, public telecommunications and social protection, for example – requires the existence of an impartial Public Service. Such a Service would be committed to implementing the policies and programmes of the Executive and to ensuring that the delivery of services to all Guyanese continues regardless of the political party in office.

I described Guyana’s Public Service as “…the muscle of public administration” when I swore-in the Public Service Appellate Tribunal on 17th May 2017.  I said then that the Public Service’s work is enhanced when it is supported by a system which ensures respect for the principle of a meritocracy and the structure of a bureaucracy.

The Public Service serves the public good. It ensures the efficiency and efficacy of the delivery of public services. Public servants are responsible for advising and assisting ministers of the Government; implementing government programmes and projects; delivering public services and executing public policy intended for the benefit of the people.

The Public Service cannot be disassociated from the concept of public trust. I addressed the National Assembly on 13th October 2016 and emphasized the need for public trust:

“Public trust encourages active citizen participation in society and the economy. It makes public agencies more accessible and more accountable. Reliable public services inspire public trust and create a favourable environment for human safety and for the functioning of businesses thereby contributing to well-functioning markets, economic growth and, consequently, a high ‘quality of life.’ Public services are essential to citizens’ quality of life.

The Public Service, to enjoy public trust and to achieve its administrative objectives, must be composed of men and women of intelligence, integrity and impartiality. They should be allowed to work “…without fear [or] favour, partiality or prejudice.” They should look forward to careers based on the principle of merit. Their employment should not be threatened or interrupted for political reasons or upon a change in government.

The Public Service Commission’s task is to ensure the establishment and existence of an impartial Public Service by insulating public servants from political influence and interference.

Dr. Bertram Collins warned, in his Report of the Commission of Inquiry into the Public Service in 1968, 50 years ago he warned of the danger of the abandonment of the merit principle and the acceptance of the practice of political partisanship. He wrote then:

“Many individual public servants no longer feel that their careers depend on merit alone but fear that they can be victims, or hope that they will be the beneficiaries, of political favour. This strikes at the heart of the ideal of an efficient public servant serving loyally the Government of the day and all the people of the country.”

I congratulate the newly sworn-in members of the ‘Commission’ and wish them every success in the discharge of their mandate. 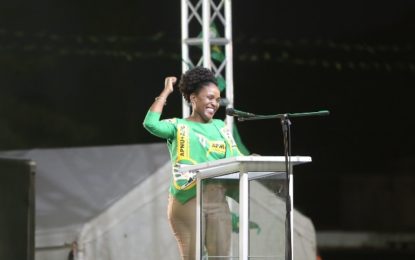 Author Details Paul McAdam Author email paul.mcadam@dpi.gov.gy DPI, Guyana, Wednesday, February 18, 2020 ‘The choice is the Coalition family to continue the progress!” So, said Shurla Scott-Richardson and Natasha Singh-Lewis. On Wednesday evening, the two Berbicians, took the stage at the... END_OF_DOCUMENT_TOKEN_TO_BE_REPLACED