– NDC, residents urged to play their role to maintain same

The streets of Crabwood Creek in Region 6 will soon be brightly lit following the instalment of several streetlights. This was the commitment made by Minister of Public Security, Hon. Khemraj Ramjattan to improve security in the community.

The pledge was made to the residents during a meeting at the local community ground. During the engagement, residents explained that several streets in the community are “pitch black” at nights, and criminals use the opportunity to commit small robberies. The installation of the lights, the residents believe, will deter criminal behaviour. 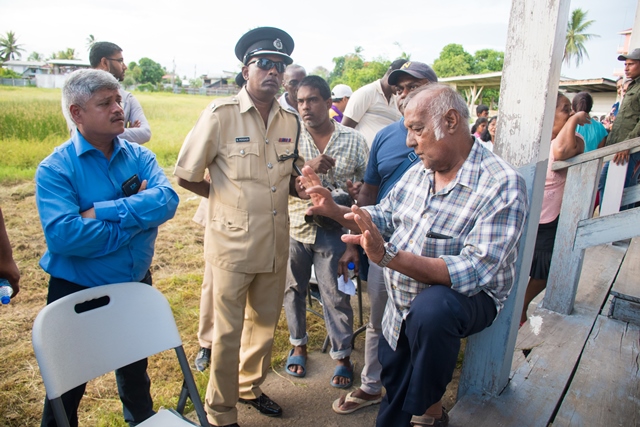 Minister within the Ministry of Public Infrastructure, Hon. Jaipaul Sharma interacting with residents of Crabwood Creek.

Chandrashekhar Bisnauth and Ameer Ally, both residents Crabwood Creek, welcomed the initiative and opined that it will bring relief to the residents.

Bisnauth said “sometimes you in the dark, and they [thieves] just wait for you, so the streetlights are really needed in Crabwood Creek.”

Ally shared similar sentiments stating that “putting up the light for the people is a good thing to do… it can avoid crime and make it safe for people coming home at night.”

Minister Ramjattan said that even though the light will be installed, the Neighborhood Democratic Council (NDC) and residents need to play their role to maintain the lights. He noted that the NDC would be required to pay a small fee of $300 per streetlight to the Guyana Power and Light (GPL) to keep the lights on.

“If the NDC can take the responsibility to pay for streetlights as is the law, that is what they are supposed to pay for and then take the money from the citizen, it would be a wonderful country and that would help to deter crime,” the minister underscored.

Security for Guyanese has been a priority for the government since taking office. The Ministry of Public Security has taken several steps to improve security and build the capacity of the Guyana Police Force (GPF). The efforts have borne fruit as there is a 3.2% decrease in serious crimes for the first half of 2019.

Also present at the meeting was Minister within the Ministry of Public Infrastructure, Hon. Jaipaul Sharma. Minister Sharma was able to listen to the concerns of the residents and pledged to return with engineers who will able to address their concerns and provide answers to burning questions.