Teachers must be equipped in STEM education

Georgetown, Guyana – (September 26, 2019): President David Granger, this morning, said there is no place for untrained teachers in the future of Guyana’s education system and investments are continually being made to ensure that they are given the requisite training in Information and Communication Technology (ICT) and Science, Technology, Engineering and Mathematics (STEM) in preparation for their roles in educating the nation’s children.

The President made these remarks at a presentation ceremony held at the Cyril Potter College of Education (CPCE) to hand over Science equipment procured with the support of the People’s Republic of China (PRC).

His Excellency Cui Jianchun, Ambassador of the People’s Republic of China to the Cooperative Republic of Guyana.

In his address to the staff and students of the College, the President said Guyana is fast becoming a digital state which will, therefore, need a population that can keep abreast of technological advancements. The digital state aims at establishing a network of connectivity, linking every person, community and government agency in the entire country, he said.

“Becoming a digital state is not a side show, it is essential to educational improvement.  The digital state, by applying ICT to add value to our production and service sectors, will trigger economic transformation. It will spawn knowledge-based industries, diversify the economy away from over-dependence on primary production, move manufacturing up the value chain and tap into larger external markets,” President Granger said.

The Head of State further said that the digital state will deliver quality public services across the country and will reduce the need for citizens to travel outside of their regions of residence, in the years to come, to access legal services, acquire passports, examine their academic and medical records, record births and deaths, receive social security benefits, register businesses, renew drivers’ licences, file income-tax returns and embark on trade and investment enterprises.

The One Laptop per Teacher Initiative, which the President launched at the CPCE on October 5, 2016, in the presence of and with the support of the then PRC Ambassador to Guyana, Mr. Zhang Limin, aimed at providing teachers with the tools they need to prepare lessons in order to improve the delivery of education. Since the launch, almost 9,000 laptops have been distributed to teachers and more is slated to be distributed in the future.

President Granger said the OLPT initiative re-asserts the importance of education to the nation, acknowledges the role of information in education and the value of teachers in the delivery of that information to students and augments other investment in teacher training.  Further, he said, the initiative started the process of modernizing ICT development, starting with educators – the brain of our public education system.

“Teachers must be geared for the important role in educating our students for the ‘good life’ as citizens in the 21st century. The teaching of Science, Technology, Engineering and Mathematics (STEM) is being accorded priority,” the President said.

He explained that STEM education allows the country to develop a more technologically competent workforce; is essential to the establishment of a digital state which demands a reorientation of the education system towards greater emphasis on STEM;  is the foundation of scientific innovation and the basis for product innovation; and requires access to adequate and well-equipped laboratories.

President Granger said CPCE cannot guarantee such quality graduates if its laboratories – both science and technology – are defective.

Further, he noted, that with continued international cooperation in education during the Decade of Development which will be launched next year, the highest importance will be placed on education.

“Teacher education will be improved during the ‘Decade’.  Increased resources will be expended to ensure that teachers can be trained in the Regions in which they live,” the Head of State said.

The Decade of Development will also ensure compliance with the constitutional obligation for free education from nursery to university. “No teacher or student will ever have to pay for education again,” the President said.

The President also extended gratitude to China’s Ambassador to Guyana, Mr. Cui Jianchun for his swift response to his request for assistance in this endeavour, in October 2017.   The President had sought the Ambassador’s support for equipping and renovating the Science laboratories at the CPCE.

“The Cooperative Republic of Guyana and the People’s Republic of China share very strong ties, history and cooperation. Guyana’s relations with China are unbreakable.  China has been a valued partner in our nation’s development for over four decades. China’s assistance to Guyana is peerless, particularly over the past decade. China is not lecturing to us. They are helping us to prepare for the future,” President Granger said.

“Guyana’s education is being repositioned. Education is moving now in the right direction. Teacher training is being emphasized. ICT education is being improved. We are making progress. We must continue to move forward to build an ‘education nation’ over the next ten years,” the President said.

Similarly, Minister of Education Ms. Nicolette Henry said there is need for increased focus on Science.  “Improving standard and support systems here at CPCE should allow both lecturers and students to have an improved experience. The benefits of this will gradually be filtered into our school system as the quality of teachers is the most significant school-based determinant of student’s outcome,” she said.

Meanwhile, Ambassador Cui Jianchun said he was very happy that after two years, the CPCE is able to benefit from much needed science equipment.   “The Chinese Embassy agreed to grant the sum of US$231, 800 to the Ministry of Education in three years to cater to the immediate, medium and long-term needs of CPCE. From 2017 to 2019 we managed to complete all this disbursement. We are glad to learn that all the deliveries were also fulfilled. I have confidence that procured equipment will make an important contribution to CPCE Science Department,” the Ambassador said.

The Ambassador said China will continue to lend support to Guyana in its developmental areas.  “China stands ready to work with Guyana to upgrade our relations to a new level…I and my colleagues are ready to do new things for Guyana and especially this College,” the Ambassador added. 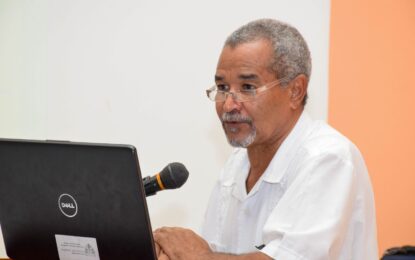 No silver bullet for COVID-19 – WHO warns

Press Release from the Guyana Elections...