THE COOL CAT AND THE LOUSY LOT

Jun 23, 2019 Government, Ministry of the Presidency, My Turn, Office of the Prime Minister, OP-ED

“ONE Cool Cat” – that is how the versatile Sammy Davis Jr was described in a recent documentary of his live shows and movie appearances. I recall, during the prime of their careers, the “master-blaster” Viv Richards and Guyana’s own cricket hero, Clive Lloyd, were celebrated as super cool cats.

In my book, the iconic cool cat was Bob Marley who sang:
“…That until the basic human rights
Are equally guaranteed to all,
Without regard to race –
Dis a war.”

I have been singing and dancing to this tune since the mid-1970s, proclaiming then with comrade Gail and many others in the PPP’s ranks, “war in the east, war in the west, war up north, war down south…”
I remember Brother Bob, when one of the coolest cats in our Coalition Cabinet, Winston Da Costa Jordan, told a spontaneous mini-rally at the end of the recent Bartica outreach, that our people must be on the ready to picket for house-to-house registration of voters.

NO INCITEMENT
“No registration, no election”, the Finance Minister said, as he added, “from today, war break” as he insisted on a clean voters list since this government is committed to free, fair and “proppa elections”. There was loud and sustained applause.
As he said that, I could hear Brother Bob mesmerising my ears with his poetic words, “dis a war…”
There was no agitation, no incitement, no calls for uprising by and in what Minister Jordan said. He was merely underlining how critical is a clean voters list for the holding of credible elections.

At that meeting, remembering the lyrics of Roberta Flack, “killing me softly with his song,” I decided to answer the lousy lot, who have been warring with our government, with a song. They were vulgarly celebrating in a certain propaganda broadsheet that I have been “shafted” and given “larwah,” the signature cuss-word of the obscene publishers who have been the biggest beneficiaries of the corrupt policy of cronyism under the Jagdeo regimes.
So, I belted out the Barbadian gospel song “Never get weary yet,” which I first heard during 1976 in St. Vincent during the election campaign there. I joined the chorus in Kingstown market square as I had thrown my support for the party of the aged political warrior, Ebenezer Joshua.

FAKE NEWS
The lousy lot are in full cuss-down mode. Yesterday, they reported wild, baseless and defamatory statements that the President of the Republic is lying when he referred to the voters list being bloated, and that it excludes names of young voters. The lousy lot, it is believed, are also behind fake news being circulated on social media that the U.S. Government would invade Guyana to force early elections.

But we should not allow that lousy lot to ruffle us. As for me, I am determined to be around, as I said at the meeting, to remind them that if they want to keep our young people off the voters list, they are asking for trouble in this country.

I mean every word that I have said. That was no threat. That was a fundamental political statement that defends the constitutional right of all persons, 18 years and above, to be on the voters list and to play their part in electing their government.

But opposition elements are fearful of their own dirty design to lock out young people from the electoral process. They are afraid of young, new voters who cannot be manipulated to enlist in racist agendas. Young people are liberal and are more prone to integrate than to be victims of the practices of ethnic preferences that have polarised our politics.

PEACEFUL PROTESTS
I am elated that young people, throughout Guyana, have responded yesterday with peaceful public protests at offices of the Guyana Elections Commission (GECOM) to demand fresh house-to-house registration of electors, especially those persons who have turned 18 since the last election in 2015.

My call was for registration of ALL persons who qualify to vote, not just coalition supporters. They include prospective supporters of the PPP and other parties.
The response of the Guyanese people to the call for new voter registration fully accords with the promise made by President Granger that he is prepared to do his part to ensure credible elections. Long before the ruling by the Caribbean Court of Justice, His Excellency was quoted in the international edition of the Guyana Chronicle (March 16, 2019), as saying, “I rely on the Commission’s readiness, the provision of funds and the expansion of time to conduct credible elections by the National Assembly.”

At the time, President Granger had met with Opposition Leader Bharrat Jagdeo who, shortly afterwards, broke his words that he would cooperate, but instead declared “war” against the government when he called on his supporters to ‘chase out’ the President and his ministers from office. That was an appeal for rebellion, for treason.

PARTNERSHIP
At that time he was calling on the President to hold new elections, knowing that the laws do NOT allow this to happen. I pointed out then, in My Turn:-
“Jagdeo knows that the Constitution entrusts GECOM, not the President, with the power of holding elections, and that a key component of credible electors is a new voters list. The present list is padded with phantom names. At the same time, it excludes the names of youths who have now attained the age of 18 and could vote in any upcoming elections. His inexplicable obsession with disenfranchising young people makes his demand for early elections suspicious.”

While serving as President back in 2006, Jagdeo is on record as saying:
“The law says that GECOM shall define the form of verification and will decide on what form it will take. Not the PPP, not the PNC, not any party – GECOM. That’s a constitutional body — independent, just like the courts.”

The position of the Guyana Government is that it would work with GECOM as well as our allies, to ensure clean elections. The assurance of partnership for this goal was conveyed by newly appointed U.S. Ambassador to Guyana Sarah-Ann Lynch, at her accreditation ceremony, when she declared:

“During our long relationship with Guyana we have witnessed significant progress. We have seen a strengthening of the democratic process and political institutions, along with broader political participation and citizen representation…Moving forward, we will continue to encourage genuinely free and fair elections; freedom of speech and assembly; multi-party representation and a constitutional judiciary process.”

This is a critical time. It requires our leaders and our media to be vigilant and responsible. We should all be cool cats, calmly watching the dark holes from which the next attacks on our democracy would emerge. 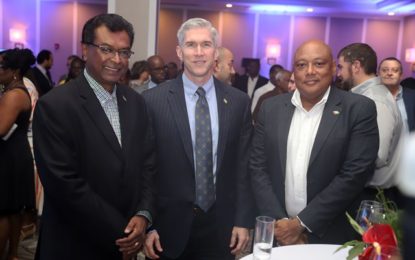