— Fresh calls for house-to-house registration made

This was the call made by Minister of State, Dawn Hastings-Williams who early this morning joined a protest outside the offices of the Guyana Elections Commission, (GECOM) at Lamaha and Main Streets, Georgetown.

The State Minister along with ministers, members of parliament, representatives of the coalition government, councillors, young professionals, students and even senior citizens exercised their freedom of assembly and freedom of speech.

Minister Hastings-Williams told the Department of Public Information (DPI) that credible house-to-house registration was necessary. “The current list is expired, it is not credible enough, it does not include our young people who have attained the age of 18 to exercise their franchise.”

Her cabinet college, Minister of Foreign Affairs, Dr. Karen Cummings, also shared similar sentiments. “We have to ensure that we do not disenfranchise anyone. In fact, we want our list to be sanitized, there are a lot of dead people on that list,” she stated.”

Minister Cummings underscored that the Coalition was “ready and prepared for elections.” 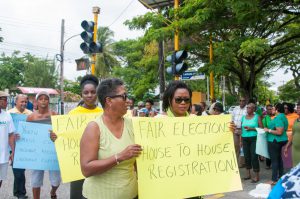 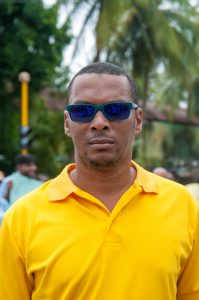 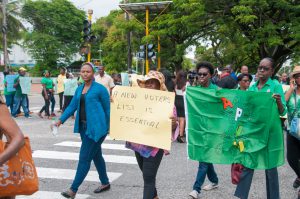 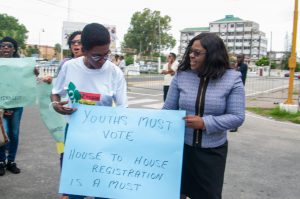 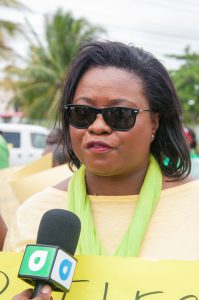 Also lending her support was newly elected Chairperson of the Alliance For Change (AFC) Women’s Arm, Tamara Khan. “There are over ten thousand people who will not be able to vote in the upcoming elections if we do not have house-to-house registration,” Khan emphatically stated.

Of the current Guyana Elections Commission, (GECOM), list, Khan noted that some 200,000 plus entries were reported incorrect, hence a new list was needed urgently. “In order for us to have fair elections, we need a new list, that is ultimately what is important, we cannot disenfranchise our youth,” she declared.

DPI also spoke with AFC Member, Michael Leonard who was very vocal in his call for house-to-house registration. “No one should be excluded from the voters’ list, to disenfranchise one is to disenfranchise a thousand,” he stated.

Leonard said his party was hitting the streets in support of the proclamation made by the His Excellency, President David Granger, that fresh house-to-house registration was needed before the next regional and general elections.