─ road to rebuilt within 6 weeks

Commuters traversing the streets in Kingston are asked to be wary of minor disruptions in traffic as works on Pegasus Hotel’s sewage system within Battery Road are underway. These works began last Wednesday and are being conducted by Collin and Sons Construction – a private company.

According to Contractor, Collin Reid, who has oversight for the project, 11 workers are, “rerouting the sewage system that passes through Pegasus Hotel”. The private project was funded by Pegasus Hotel Guyana and entails the rerouting of one mile of sewage pipes.

The works are being conducted along Battery Road, Kingston, and commuters are asked to adhere to signs of traffic diversion.

Commuters travelling North on Water Street will see a traffic sign at the Cowan Street intersection indicating that there is a detour 1,000ft ahead. 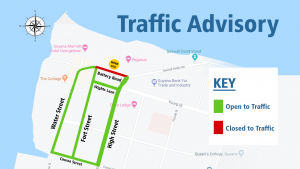 Illustration showing the roads open and closed to vehicular traffic 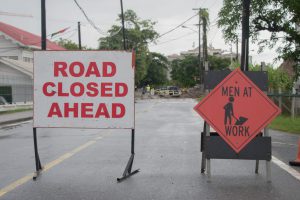 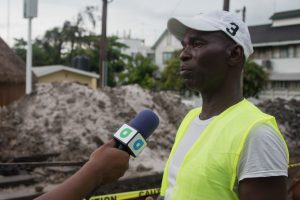 After the sewage pipework on Tuesday, Collin and Sons Construction Company will rebuild the road to its former state. This is expected to be done within 6 weeks.

Public Relations Officer (PRO) within Guyana Water Inc., Leana Bradshaw told the Department of Public Information (DPI) that GWI has been instrumental in guiding the contracting company throughout the project. “It is within GWI’s interest to ensure specifications, in terms of materials, are met [and] the timelines and the methodologies used to carry out the work,” PRO Bradshaw stated. The water utility company also has supervisory staff at the worksite.