US gives support for Guyana to pursue transparency in extractive sector

The Government of Guyana today received financial support from the US Government towards the strengthening of transparency and accountability within the extractive industries. 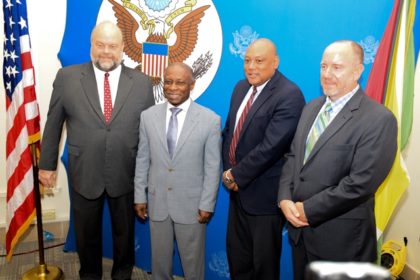 The US Government provided a US$297,000 grant to the Carter Centre to facilitate a series of capacity building programmes over a 12 month period.

The announcement was made at the US Embassy, Kingston, Georgetown by US Ambassador to Guyana, Perry Holloway.

The programmes are intended to enable Guyana to submit its application for the Extractive Industries Transparency Initiative (EITI) candidacy and thereafter to maintain its participation. Guyana is preparing to submit its candidacy to the (EITI) in November.

According to Minister of Natural Resources,  Raphael Trotman, joining EITI is part of the government’s commitment to improving transparency and accountability within the extractive industries.

“More importantly, membership to EITI encourages investment in the country,” Trotman said adding, “EITI will bring many benefits to Guyana which includes an improved investment climate, a signal to international investors that the government has a clear commitment to transparency and good governance and strengthening accountability vis-a-vis the Guyanese people,” Trotman said.

Meanwhile, Ambassador Holloway praised the efforts being taken towards making EITI a reality in Guyana. “I am confident this programme will strengthen the work of the Government of Guyana in promoting transparency in the country’s extractive industries at a time when Guyana prepares to welcome future growth in the petroleum industry,” said Ambassador Holloway.

Foreign Affairs Minister, Carl Greenidge noted that the extractive industry offers the potential for transforming the welfare of Guyanese and therefore it is especially important that those resources are effectively and efficiently managed.

“It is a relatively easy task for Guyana to embrace this particular initiative. We appreciate the contribution of the United States to this dimension of governance in Guyana…we are also especially appreciative of the willingness of The Carter Centre to once again step in to Guyana with a view to helping it to enhance its capacity to implement a commitment made to the public,” Greenidge said.

Country Representative of the Carter Centre Jason Calder said “Our assistance is intended to build off that recently provided by the World Bank and to complement the fruitful collaboration Guyana has already established with the EITI Secretariat in Trinidad and Tobago,”

This recent assistance will see the Carter Centre working with the Ministry of Natural Resources and the Guyana MSG to:

Guyana has a long history of collaboration with the Carter Centre in the political and civil society arenas. “The Carter Centre involvement with the EITI builds on more than a decade of work on transparency and access to information at the global level in more than 17 countries,” Calder noted.