Fifty youths from Whitewater village, Region One, graduated from the Warrau Language project last weekend. The one year project is part of government’s effort to revive dying indigenous languages. 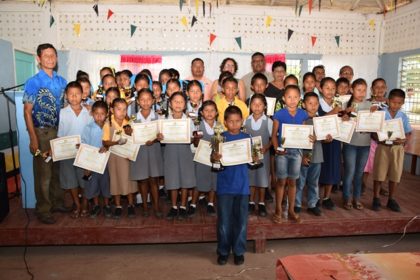 Minister within the Ministry of Indigenous Peoples Affairs, Valerie Garrido-Lowe (centre to the back) along with the 50 youths who graduated from the Warrau language project

Minister within the Ministry of Indigenous Peoples Affairs, Valerie Garrido-Lowe, who attended the graduation, congratulated the youths for taking the first step towards reviving their native language.

Minister Lowe urged the youths to practice what they have learnt and pass on their knowledge to others in their family so that eventually, the entire community would benefit.

“You came from several different homes, if you can teach your brother and sister… to say ‘how are you’  ‘fine thank you’, if you teach them that, it will spread from 50 homes,” Minister Lowe explained.

The youths were urged to not to be ashamed of their language as it is a part of their culture. 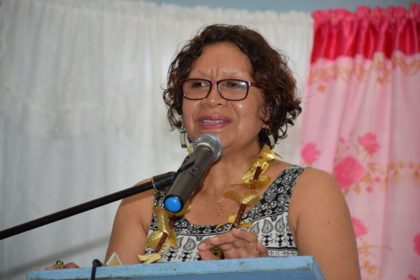 Minister within the Ministry of Indigenous Peoples Affairs, Valerie Garrido-Lowe speaking to the youths who graduated from the Warrau Language project

The Minister pledged  that the Ministry of Indigenous Peoples’ Affairs would continue to support the revival of indigenous languages across the country.

At the launch of Indigenous Heritage Month, September 1, 2015, President David Granger had noted that while many of the older folks spoke in their tribal tongue, the younger generations were not keen on preserving it.

“It is, therefore, important that those languages be preserved and practiced because for many it is the most efficient means of personal communication… we are all poorer when we are not able to communicate with each other” President Granger had said.

In June 2016, the sum of $2M was donated to the residents of the Kamwatta Hill, in Region One for the revival of their Warrau language.

Additionally, plans are in place to re-establish the Amerindian Language Project under the name Indigenous Language Project at the University of Guyana as part of a cultural preservation programme.