We must stand together for progress- Min Norton says

Minister of Social Cohesion Hon. Dr. George Norton assured residents of Lake Capoey, Region 2 that the coalition government will continue to improve and develop their community.

But this, he said, can only be done with the cooperation of all who seek progress, opportunities and development for the benefit of the nation’s future leaders. 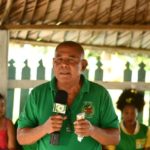 “We must stand together for progress…we must not stop the progress, let it continue,” the minister said, on Tuesday, during a community outreach. Reminding that the coalition government is “here to serve its people”.

Reflecting on his decision to join the then PNC/R, now a part of the APNU+AFC coalition, Minister Norton explained that the party’s eighth objective spoke about the protection of the Indigenous peoples’ rights, culture and language spoke strongly to him.

According to the Minister, this is an agenda that he holds dear to his heart to ensure his fellow Indigenous brothers and sisters are catered for and respected.

“We respect you and are aware that you are concerned about your children…you envision a future for your children, a better life. You have a vision of development for your community and it aligns with the coalition government’s vision and we are here to support you,” Minister Norton said.

Spotlighting the improvements undertaken in the community, Minister Norton spoke about the implementation of the hot meal programme which saw an increase in students’ attendance, the donation of a boat engine to as sit in transporting students to school and the commissioning of a water system among others.