The Wismar Bridge in Linden has been a debatable issue lately. Mayor of Linden, Carwyn Holland providing clarification said the bridge is structurally sound.

The 49-year old bridge which links Wismar and Mackenzie was reportedly dilapidated and in a deplorable state. 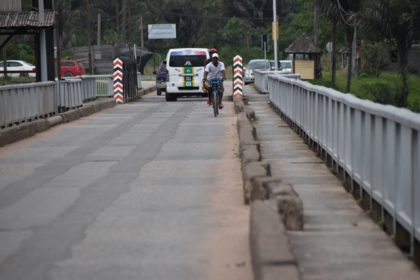 Wismar Bridge being used by commuters and vehicular traffic.

Speaking with media operatives today at the Linden Town Council, Mayor Holland explained that the report he received from the engineers, states that the bridge lacks “some maintenance.” As such the Ministry of Public Infrastructure will conduct sand blasting exercises in order to clean the structure. Also, the wooden deck area, located atop the center of the bridge will be repaired removing the need for monthly maintenance.

He disclosed that the Town Council is taking take the lead on the upkeep of the bridge, and will use the revenue earned from bridge tolls for its maintenance and other community development projects.

“We look forward to caring it (Wismar Bridge) better. This community (Wismar) has been paying for that bridge for decades and it is time that the bridge returns something to the people of Linden,” Holland declared 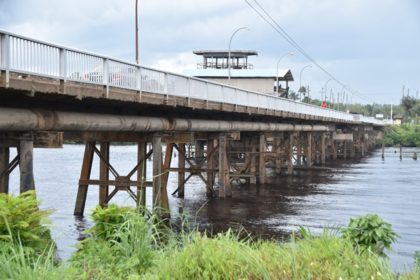 Bottom of the Wismar Bridge.

Additionally, the Linden Mayor indicated that discussions for a new bridge are ongoing.

The Ministry of Public Infrastructure had announced that a US$800K feasibility study for the Wismar Bridge was once slated for funding under an Inter-American Development Bank (IDB) loan, however, these funds are being utilised for other projects.

Holland said that according to the Ministry of Public Infrastructure, Budget 2018 will cater for the study to be conducted and look at possible relocation of the bridge.

The Mayor has advised in the meantime residents monitor the weight going over the current bridge to prevent overloading.