Several teens residing in the East Berbice-Corentyne Region can now boast about their new skills which they have acquired after participating in the Information Communication Technology (ICT) code camp 2019.

Compliments of the Ministry of Public Telecommunications, the programme which commenced on February 9, saw 48 youths from the Corentyne district taking advantage of the course; while a total of 21 participated from the town of New Amsterdam. The courses concluded on July 27.

On Thursday, both batches received their certificates at separate graduation ceremonies, which indicates their successful completion of the Information Technology (IT) journey during the six months.

Kashnarine Seepersaud, one of the top students from the Corentyne Coast was not hesitant to speak about his new-found knowledge, which he believes will benefit him in the future. Seepersaud was among the group of individuals who participated for the intermediate training. “I did HTML (Hypertext Markup Language) and Python, but I enjoyed Python more. Every week that I came, it helped me to improve a lot in school. When I am older, I want to become a web designer with this knowledge I would have received,” Seepersaud noted.

Fifteen-year-old Simeon Jonas, who underwent the level one training, was awarded the top student. The award for most improved pupil went to Yogita Mangru, and the best attendance award was received by Dharshan Samlall. The special awardees received a digital tablet each compliments of the Ministry of Public Telecommunications. 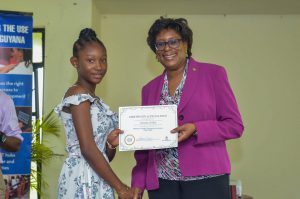 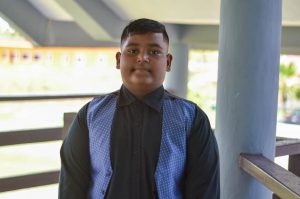 Kashnarine Seepersaud, one of the top students in the intermediate class 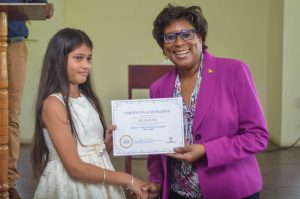 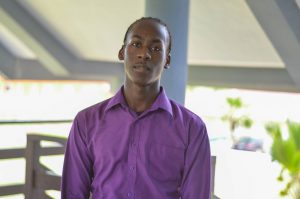 Fifteen-year- old Simeon Jonas, one of the top students of the level one course

Over at New Amsterdam, the highly anticipated graduation and award ceremony was held in the auditorium of the Technical Institute. Isaiah Chand, Atonio Ramcharran, Nashon Mahadeo and Dhanesh Ramnarais were acknowledged for their efforts in gaining 100% pass.

“Throughout this course, we achieved so much. For me, I now know how to create and develop websites, we learnt coding and many other lessons which can help young people. The course is beneficial because it will help me with my SBAs (School-Based Assessments) and my upcoming examinations,” the aspiring IT teacher said during an interview with the Department of Public Information (DPI).

Meanwhile, little Ngoshe Simon noted that at first, it was hard coping with the various instructions and lessons. “I am glad for the opportunity and that I have improved by studying hard.” She too was gifted an electronic table for being the most improved student in her class.

Minister of Public Telecommunications, Hon. Catherine Hughes remarked that the coding camp initiative is to allow youths to be exposed to technology at an early age.

“Many of you know that the whole world is moving in all kind of technological directions and technology really has an opportunity to transform. So, for us, we (government) felt that they are so many things that Guyana will be able to do in a more efficient manner if we start to embrace technology.”

Minister Hughes emphasised that the government continues to invest in the Information Technology sector which will put Guyana in a better place.

‘As a government, we have to improve telecommunications, we have to make sure that schools, ministries, government building have internet service,” Minister Hughes added.

According to the minister, other regions in Guyana will benefit from similar training and the ministry will continue working to enhance the Information Technology sector.