Department of Energy being carefully established

As Guyana prepares to establish a Department of Energy, President David Granger said progress is being made. “We have a roadmap we have to identify personnel, buildings, we have to start advertising to attract the quality personnel that they can lead this important department into the future.” 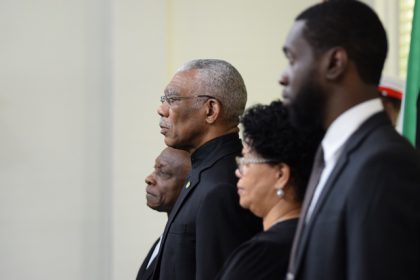 The president, speaking to reporters today at State House, explained that since Guyana is new to the industry, hiring persons will be “a challenge, this is an international industry, we are aiming at a world-class industry, so we have to get the best persons. Guyana has no experience in the field”.

The president said the government has to ensure they “attract the best people from around the world,” as such, they will be looking to hire experts in the field from overseas.

In March of 2018, Minister of State, Joseph Harmon announced that a Department of Energy within the Ministry of Presidency would be established, which will assume the responsibility of the oil and gas sector from the Natural Resources Ministry.

Minister of Natural Resources, Raphael Trotman, earlier in the year, explained that he had proposed the idea of to have a Department of Energy due to the expansion of the industry in Guyana. “This Department will be the only one which will be focused on the development of the petroleum sector.”

An inter-ministerial task force has since been formed to supervise the creation of this new department.