There is a popular saying that every good thing must come to an end and this may aptly depict the situation of Diamond Secondary while the view that determination coupled with hard work and foresight can certainly achieve success as Lancaster secondary can certainly stake claim to this view as results in the 2018 Department of Education Region Four STEAM competition were announced. 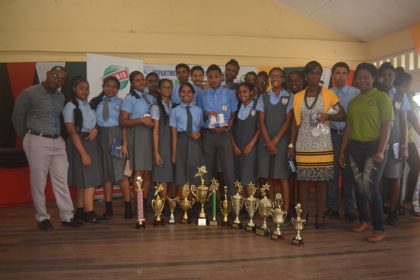 Despite submitting some eleven projects and was given the edge to retain their 2016 title Diamond Secondary had to make way for 2016 third-placer Annandale Primary who was convincing in every aspect, thus capturing their first Science fair title while newcomer Lancaster Secondary who according to their teacher Rhonda Monise was tempted to quitting owing to the fact that they never competed for in such a competition before took a well-deserved third place.

The competition was described as being very intense by Coordinator Loren Park who readily confessed that the committee encountered some glitches, thus resulting in the results being late. “I am aware that I will take some licks but the truth is that there were some glitches and that is the truth. However, I am very happy that we have the correct results so there is not going to be any concerns being expressed. I would like to express to all the schools, teachers, parents and most importantly students my sincere apologies because as the Coordinator of this event I am responsible,” he said.

The science fair coordinator noted that already he has begun to postmortem this year’s competition with the view of implementing some changes for future competitions. He added that some of the changes would provide the releasing of results much faster while removing some of the undue challenges. “We need to have a much smoother executed science fair in relation to the dissemination of the results and we had some challenges owing to several factors. However, I am giving assurance that for the next fair it would be more streamlined and smoother as the appropriate systems would be implemented,” he promised.

Park said that overall it was a very well executed competition noting that over 100 projects were received representing 47 odd schools dubbing this as a testimony of the eagerness and excitement by students to participate in the biennial fair. 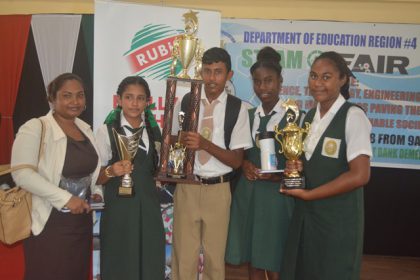 Meanwhile, Chief Judge, Gerald Jewram in his evaluation said that the judges found that every school truly understood the theme of the fair indicating that this was a clear indication in the ability to confer to established themes. He, however, disclosed that despite the excellent showing by several projects there was some weakness which he hopes that teachers and officials within the department would work in improving for the next competition.

He pointed out that the interest of several students was evident while their knowledge about the projects deserves commendation. “We the judges found that several of the students fully understood their projects and did a remarkable job in explaining it, thus move are of the view that it’s the right direction to go for several of the schools,” Jewram said.

He added, “I would, however, like to urge the students and teachers to build on what many of them have started as it argues well for the future”.  The Chief Judge in addressing the challenges stressed that if they were to go unchecked, it has the ability to erode the impressive track record that the fair has established for itself over the years. “I can tell you that there were greater points of commendations than the faults. However, let us not fool ourselves that if these issues are not properly addressed in a timely manner, it can affect greatly the impressive track record built thus far,” he warned. 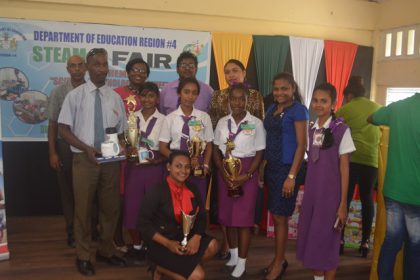 President’s College with their spoils.

In the primary category, under Mathematics, Annandale, Chateau Margot and New Diamond Grove with 138, 123 and 110 points took first, second and third place.  For Craft and Visual Arts with 114, 111 and 104 points were La Bonne Intention, Swami, and Annandale respectively. Cane Grove, Lusignan, and Silver Hill primary schools took first, second and third place with 114, 113 and 100 respectively, under Environmental Science. However, under Science first, second and third place went to Clonbrook, New Diamond Grove, and Enterprise primary respectively with 115, 113 and 108 points. Capturing the special prizes were Annandale Primary for the best overall booklet/report and returning to take the best overall display. Annandale primary went on to capture the two remaining prizes in their clean sweep of the special prizes with best oral presentation and best overall primary project with their Mathematics project. 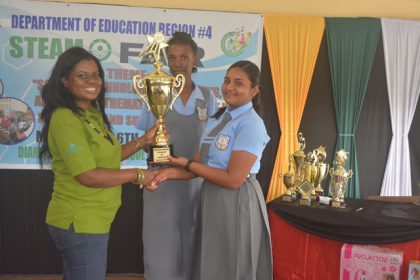 Diamond Secondary Students gleefully holds the trophy that was donated by Stabroek News after winning one of the categories.

Meanwhile, in the Upper secondary school category, under Environmental Science were Diamond, Covent Garden and President’s College taking first, second and third place with 119, 118 and 115points respectively. For Integrated Science the first second and third place winners with 109, 88 and 50 points were Covent Garden, La Bonne Intention, and Dora secondary respectively.  However, under Agricultural Science Annandale Secondary with 97 points to La Bonne Intention’s 89 points took first place.  For Visual Arts, scoring with 98, 56 and 26 points were Diamond, President’ College, and Golden Grove Secondary respectively.  Diamond returned to the Home Economics section and took first place along with Beterverwagting PIC and President’s College third with 109, 109 and 64 points respectively. For Mathematics it was 116, 95 and 63 for first, second and third place to Covent Garden, Annandale and President’s College.

Taking the special prizes in the Upper Secondary category for Best Booklet was Covent Garden Secondary; best display went to Diamond secondary. Diamond Secondary returned to take both the best oral prize and the best overall project which was Environmental Science.

Coordinator Park indicated that the presentation to the top three schools will be made at a specially arranged presentation ceremony slated for next week. He thanked several donors and sponsor declaring that had it not been for the generous efforts of several corporate individuals and companies the success of the STEAM fair would not have been possible. “Rubis, SOL, GPL and media houses like Stabroek News and Guyana Chronicle played a significant part in their respective ways and I am forever grateful and thankful to them as they ensured that we had a successful 2018 STEAM fair,” he said.