(February 10, 2020) – Surrounded by family, friends and well-wishers, Mrs. Pearl Gravesande celebrated her 100th Birth Anniversary today at the Archer’s Home. Minister of Education, Dr. the Hon. Nicolette Henry was present to share in the joyous occasion with the centenarian and her loved ones.

Ms Gravesande is a retired headteacher and dedicated 56 years of service to the education sector. According to Minister Henry, it is not every day that we celebrate a centenarian and more excitingly one who was an educator. 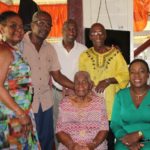 Mrs. Gravesande surrounded by three of her sons, her daughter-in-law and Minister Henry. 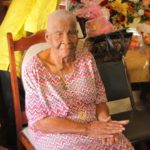 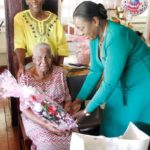 Minister Henry Presenting Mrs. Gravesande with one of her many birthday gifts.

Minister Henry said that she was honoured to be in Mrs. Gravesande’s presence to express her gratitude on behalf of herself, the Ministry of Education and the Government of Guyana the for the contributions and sacrifices the former educator would have made during her time of service to the sector.

Minister Henry noted that the education system today continues to benefit from such longstanding service which has contributed to the moulding of those she taught.