A Memorandum of Understanding (MOU) was today signed between Guyana and Trinidad for cooperation in the energy sector.

The MOU was signed at State House between President David Granger and Prime Minister of Trinidad and Tobago, Keith Rowley. 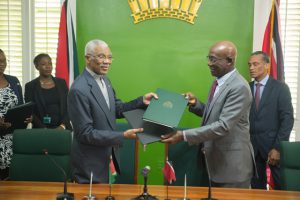 President Granger said the signing of the MOU represents a step forward for the two countries which have enjoyed fruitful relations for many years.

Apart from energy cooperation, the president said discussions extended to the areas of Agriculture, Youth, Sport, Security and other fields.

“We expect that as a result of this engagement the relation between our two republics will become stronger. We see ourselves as a foundation for the Caribbean Community, what we are doing is strengthening the Caribbean,” President Granger said.

He described today’s meeting as a reassertion of Guyana’s Caribbean identity, noting that there is much to be learnt from Trinidad and Tobago, which is one of the most developed countries in the Caribbean, in terms of manufacturing, export, education and standard of living.

“Guyana is an arduous CARICOM state, we have abundant raw materials, natural resources (gold, diamonds, timber, manganese, bauxite) …we are confident that by collaborating we will be able to combine the natural resources of Guyana with the entrepreneurial expertise, capital and investment from Trinidad and Tobago,” the president explained.

Prime Minister Rowley, while echoing similar sentiments as Guyana’s Head of State, said today’s meeting represents the documentation of the two countries to do more in terms of neighbourly relations for the economic benefit of both sides.

He pointed to the role of the two governments in laying the groundwork for the private sector to seize opportunities available to both countries. Guyana and Trinidad, the Prime Minister said, have too many commonalities and history to be held back by bureaucratic impediments.

“We also mentioned, if not discussed in detail the existence of invisible borders in our endeavours and where we should not acknowledge the existence of borders, but to let our effort identify the resources available in each of our countries and to put those resources… to work so as to grow the economy of Guyana and of Trinidad and Tobago,” Prime Minister Rowley noted.

Minister of Foreign Affairs, Carl Greenidge, Minister of Business, Dominic Gaskin, Minister of Agriculture, Noel Holder, Minister of Social Cohesion, Dr. George Norton, Minister within the Finance Ministry, Jaipaul Sharma and other senior officials from Guyana and Trinidad were present at the signing ceremony. The high-level Trinidad delegation is here for a two-day state visit.