─first female Prime Minister to be awarded this honour

As Guyana gets ready to observe it Golden Jubilee, fifty years as a Republic Nation, the Advisory Council of the Orders of Guyana have bestowed upon Barbados Prime Minister, the Honourable Mia Amor Mottley, Guyana’s second-highest national award, the Order of Roraima.

In a simple, but important ceremony earlier on Monday, His Excellency President David Granger conferred the honour upon the sitting head of the Barbados Government. 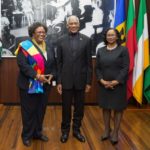 (from left) the Hon. Mia Amor Mottley Prime Minister of Barbados, His Excellency President David Granger and Chancellor of the Judiciary, Justice Yonette. 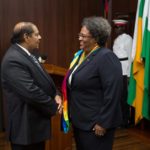 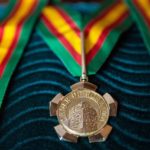 Explaining the decision of the council, Chancellor of the Judiciary, Justice Yonette Cummings-Edwards, who is also Chairperson of the Advisory Council of the Orders of Guyana, explained that the Constitution of the Orders of Guyana provides that any distinguished citizen of another country who has rendered valuable service to Guyana or whom for any other reason the state wishes to honour may be appointed as an honorary member of the Order of Roraima.

“This year is the Golden Jubilee and it is significant that this Dear Land of Guyana pays special honour to a distinguished citizen of CARICOM, Prime Minister Mia Amor Mottley, who has rendered outstanding service and valuable service too to the Caribbean region,” stated Justice Yonette Cummings-Edwards.

After bestowing the award, His Excellency President David Granger spoke of the friendship between the two countries.

“The conferral of Guyana’s order of Roraima on Barbados’ Prime Minister exemplifies the essential elements of the historical fraternal relations between our two Caribbean states. This investiture is richly symbolic for Guyana, for Barbados and the Caribbean. Our two states pioneered the founding of the Caribbean Free Trade Area CARIFTA in 1965, prior to independence. Our two states both gained their independence from Britain the following year in 1966,” … Uniquely established a joint high commission in London soon after independence. Prime Ministers Forbes Burnham and Errol Barrow were among the four founding fathers who signed the treaty establishing the Caribbean Community in Chaguaramas in Trinidad and Tobago in 1973,” the President stated.

In the meantime, The Barbados Prime Minister expressed her heartfelt gratitude to the government and people of Guyana for the honour.

“I firstly simply want to say thank you, because I accept this honour, not on my own behalf but on behalf of the people of Barbados. I am conscious that it is the people of our country in Barbados over the course of centuries that have worked with the people of Guyana.” … “The path of our two countries is inseparable and I look forward to our being able to build Mr. President, on that relationship,” PM Mottley.

This is the third national award given to a foreign head of government or head of state; in 2016 President David Granger, who is Chancellor of the Orders of Guyana, conferred then Prime Minister of Barbados, Freundel Stuart, with the Order of Roraima, for his support for the rights of Small Island and Low Coastal Developing States, his advocacy for CARICOM’s demand for reparations for the citizens of the Caribbean Region and his contribution to the reduction of the impact of climate change in the Region.

In 2019, Ghana’s President, His Excellency Nana Akufo-Addo was conferred with Guyana’s highest National Award, The Order of Excellence for his “unflinching” support for the rights of developing states.

Guyana became a republic nation on February 23rd, 1970, forming its own government system.