Natural Resources Minister, Raphael Trotman pledges to open up new mining lands in Imbaimadai, Region Seven. However, miners are being warned against disrespecting the laws and violating the rights of the nearby indigenous communities.

The Minister of Natural Resources, at the behest of President David Granger, today led a team, comprising representatives of the Ministries of Communities and Health, and officials from the Guyana Geology and Mines Commission (GGMC) to the mixed community of indigenous people and coastlanders in the Cuyuni-Mazaruni region. 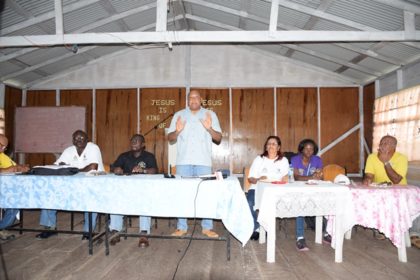 Minister of Natural Resources Raphael Trotman makes a point during a meeting with miners and residents in Imbaimadai, Region Seven

The visit followed a letter sent to the President by the Imbaimadai Development Group, outlining the economic plight of the community, which was described as “dying” without access to the lands, which were needed to carry out its main economic venture, mining.

The state of affairs of the community was further repeated, by the villagers, themselves, when the Minister and team, heard from them at a meeting, today.

The residents told the story of a once vibrant mining community, to today being unable to sustain its many infrastructural developments.  The residents claimed that about four years ago, there were over  70 mining dredges registered in the community, but today, only 13 remain, of which only 7 are in operation, “because there is no land to work,” one resident told the Minister.

Another said the last set of 50 mining blocks, given out by the GGMC to the residents were “already mined out, to a large extent…and a lot were in rocky areas.” 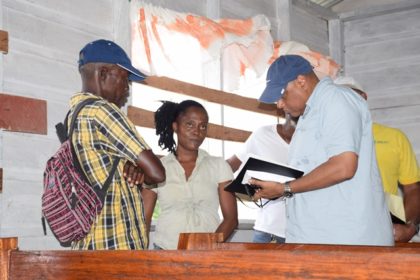 Minister of Natural Resources, Raphael Trotman notes the concern of a resident of Imbaimadai, Region Seven

In responding, Minister Trotman gave an undertaking to open up some lands, in the community. “I will do that within six weeks…,” he told the residents, advising that he would in that time once again visit the community with, officials from the GGMC and the Closed Hearing Committee, set up by the Natural Resources Ministry early this year to find land for miners.

“We will come with the maps and we are going to work out, without violating the laws or any other titled lands…what lands will be given out,” the Minister said.

The Minister also advised the residents to get themselves into an association, so that the lands will be granted as a block. “When we open up these lands, there will be a shout and people will start coming, so, we prefer to know that people from Imbaimadai are the ones who are benefitting first,” the Minister explained. 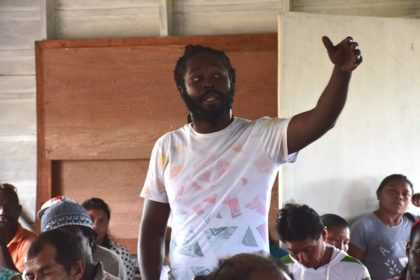 A resident of Imbaimadai raises a concern at the meeting with Minister of Natural Resources, Raphael Trotman

But even as the residents were assured that lands will be provided, the Minister warned that the government also expects them to mine those lands, in a manner conducive to the laws of the land and rights of their indigenous neighbours.

“This is a mining community, but is also a community that is based within an Amerindian titled land…so whatever is going to happen will mean that this community is going to continue to mine, but it would also have to respect the fact that it is adjoining Amerindian lands,” the Minister said.

He also called on the indigenous and coastland residents in the village to work together for the community’s development. “We need to understand that we need to work together, and that is the undertaking that the president wants. He wants to see cohesive communities and cohesive societies, and communities that are flourishing,” the Minister advised. 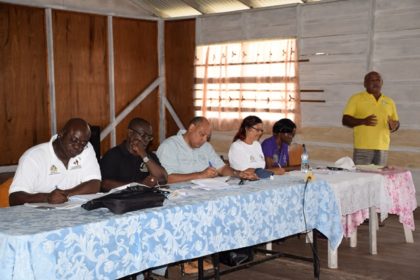 Minister of Natural Resources, Raphael Trotman and team including Permanent Secretary of the Ministry of Communities, Emilie McGarrel at the meeting in Imbaimadai, Region Seven

The Minister also reiterated the President’s commitment to work with all residents across the country to ensure thriving communities. “We are here because the President has asked us to come, and he has asked us to come because he has taken a special interest in this community…No community to the president is one that should be allowed to perish,” the Minister stated.

During the engagement the Minister also committed to resolving some issues of a neighbouring Amerindian group, including issues of land titling certificate issued under the previous administration.

He also committed to bringing to the attention of the Minister of Public Infrastructure, the issue of the cost of flights and charters to the village. This issue was raised by the residents. 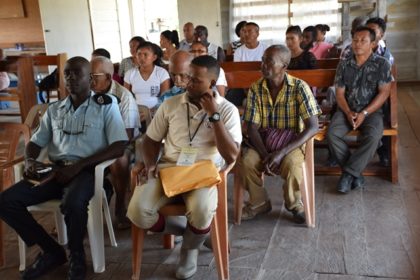