Minister of Citizenship, Winston Felix, who defended the allocation for the citizenship and immigration service programme, under the Ministry of the Presidency this morning, upon inquiry from Opposition Member of Parliament (MP), Clement Rohee explained that a provision of $50 Million, provided for the construction of two new passport offices 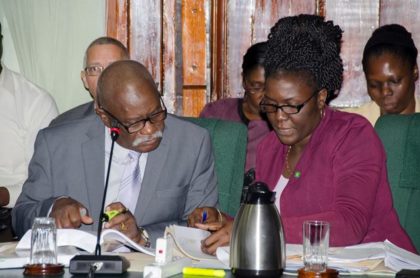 Minister of Citizenship Winston Felix supported by the Permanent Secretary of the Ministry of the Presidency, (ag) Abeena Moore providing the answers for the budgetary allocations for Citizenship & Immigration Services.

Felix said this act is in keeping with Government’s vision of decentralisation of these services. The offices will be built at Linden, Region Ten and New Amsterdam, Region Six.

Minister Felix explained that the buildings to be constructed would provide for adequate space for both the public and the staff. He further clarified that on the onset, as is customary, the two offices will be staffed by the members of the Guyana Police Force (GPF), but that the staff would eventually transition to civilians. The contracts for the two buildings are still to be tendered, the Minister said.

Further, the Minister explained, a provision of $126.700 in the Budget will cover the procurement of furniture and the setting up CCTV cameras at both locations.

Minister Felix also explained that an increase from $9.517 Million to $37.510 was for printing material. He told the House that the increase covers printing of birth certificates on high quality paper that is not so easily replicated. The Minister explained that the paper has several security features.