His Excellency, President David Granger, has said there is no immediate plan to dissolve Parliament because the House will have to approve additional spending.

“I cannot say now when Parliament will be dissolved. I will stay away from dissolution as long as there is a likelihood that we will need the vote of the whole parliament to pass any financial measure.”

The Head of State was responding to questions from the media on the sidelines of an accreditation ceremony today. 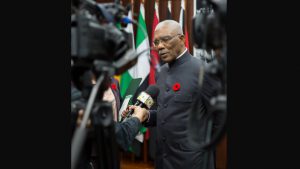 The Head of State explained that in the case of urgent matters such as floods or fire, funds may be needed and only Parliament can authorise the disbursement of funds.

“Even though we are in the eleventh month of the year, it is public knowledge that we have not drafted a budget for 2020, and we have to be very prudent in our expenditure. It means that if there are any extraordinary expenditure rising out of any unanticipated situation whether it is an act of God, a force of nature or any other, I feel it is prudent to keep the Parliament opened as long as possible,” President Granger explained.

The opposition People’s Progressive Party vowed not to return to the 65-seat National Assembly. This act, however, is in contravention of the Constitution and disregards the instruction of the Caribbean Court of Justice (CCJ) which called for both sides of the House to sit and resolve their differences via Parliament.