Over 400 persons are employed in building the Central Housing and Planning Authority’s (CH&PA) model housing village at the Perseverance Housing Scheme on the East Bank Demerara.

This was disclosed by Project Manager, Kennard Dazzell as he led the media on a tour of the village today. Dazzell was accompanied by Chief Executive Officer (CEO) of the CH&PA, Lelon Saul.

The model housing village is a collaborative effort between the CH&PA and private developers. The village’s construction serves to inform and promote the government’s focus of providing access to adequate and affordable housing solutions, in well planned communities.

The village, on which construction started approximately nine weeks ago, will be the feature of a three-day exposition set for May that seeks to highlight these government housing solutions.

The houses being constructed for display and sale, by the private contractors, range from low to moderate to middle income and are 600 square feet (sq. ft.), 900 sq. ft. and 1100 sq. ft. respectively and vary in options of concrete or timber (green heart) and flat or elevated. CH&PA is constructing six duplexes and two single units. Also on display would be two houses, constructed by a Polish company.

Dazzell explained that the latter is a result of the Minister within the Ministry of Communities with responsibility for housing, Valerie Adams-Patterson’s visit to Poland earlier this year. Consequent to the visit, the company shipped pre-fabricated materials to the country that would demonstrate, how they construct fire proof houses, Dazzell explained. In fact, Dazzell noted that in addition to the Polish prefabricated houses, four other houses will be constructed using prefabricated materials.

The village plans also cater for a recreational ground and in each housing block, open spaces (vacant lots that are undeveloped and are accessible to the homeowners living in that block). It also covers the development and installation of other infrastructure such as roads, water and electricity in keeping with the government’s focus of delivering cohesive communities.

Dazzell assured that the work delivered will be of the best standard. He said that the CH&PA has learnt from the mistakes of the 1000 homes (turn-key) project and has put systems in place to ensure that the end product is one that not only the beneficiaries are satisfied with, but one that the Agency can stand by. The 1000 homes project initiated by the previous administration developed defects in the structure of the buildings even before the homes were occupied.

Dazzell assured that in the construction of the homes for the model village, every step of the way, quality is being monitored. “From the concrete that is coming in, we are taking the necessary slump test. We monitor in terms of the water-cement ratio, and the stuff that is coming in to pour into the concrete. We are also monitoring the steel arrangement,” he said.

He explained that this can be done, since the model that is being used for the construction of the buildings is one whereby the CH&PA is responsible for the supply of the building materials. Hence, CH&PA has greater control with regards to, “what comes in and what is issued to the contractors,” Dazzell said.

This model allows for the CH&PA to send its own people to the suppliers, to handpick the material, Dazzell explained. “We handpick and if it is not of the standards that we are looking at, we send it back,” he said.

This model also allows for the smaller contractors employed to deliver the houses, and build capacity whilst delivering work of the highest standards. Dazzell noted, “This is important, because otherwise, none of these guys here that are participating right now that is giving you this high-level of quality of work that we are getting here would have been able to do anything.”

Meanwhile, Saul reminded that the government, through the CH&PA, is seeking to create a long-lasting model village that the public can, over the years visit and appreciate, the government’s “new” housing ideas, for 2017 and beyond.

He reiterated that the project is the initial start of a programme which seeks to maximise the use of the government’s available service lands to offer a range of housing solutions which will cater to the needs, of other low, moderate and middle income persons, particularly state employees and youth.

This programme is also about providing affordable options that aim at significantly reducing the 25,000 housing application backlog within the CH&PA system, and to have the 28,000 vacant house lots across the country occupied. Hence, the prospective home owners must have, previously applied or must make an application for the house lot with the authority, the CEO explained.

The eight housing units that are constructed by CH&PA itself are also part of an initial 265 buildings that will be constructed this year in 10 locations in six regions (2, 3, 4, 5, 6 and 10). These will be divided into 768 units, each housing a family and are expected to cost the government about $5 Billion. 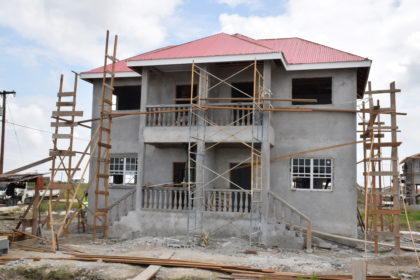 A concrete two-storey housing being constructed by a private developer

A flat concrete house being constructed by a private developer 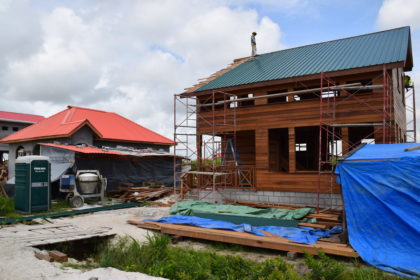 A wooden two-storey housing being constructed by a private developer 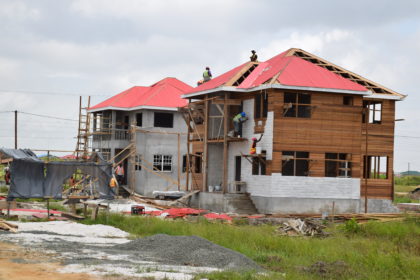 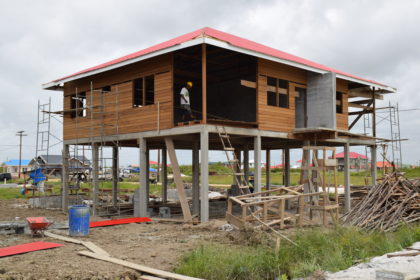